Control charts are specialized time series plots that help you determine if a process is in statistical control. Although some of the most widely used ones like Xbar-R and Individuals charts are great at detecting relatively large shifts in the process (1.5+ sigma shifts), you will need something different for smaller shifts. Enter the Exponentially Weighted Moving Average (EWMA) chart.

Some of the important properties of EWMA charts are:

But the biggest advantage the EWMA chart is you can use it to detect small shifts in the process mean. This is important because early detection helps you react faster and fix the process.

Let’s say a manufacturer of small polypropylene spigots wants to use process control charting to monitor tensile pull strength. The manufacturer is concerned about the possibility of small shifts in the mean.

An Individuals control chart for the data shows the process in control. However, there does appear to be a small shift in the process around observation 66. 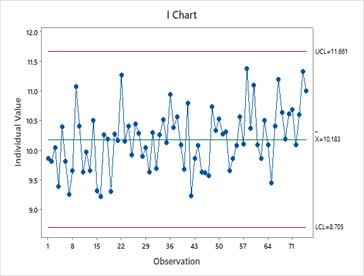 For the same process data, the EWMA control chart flags the last data point as out of control.

The engineers can investigate the process for possible special causes that are affecting the process mean and eliminate them.

Where Could You Use the EWMA Control Chart?

The same concept could apply to numerous metrics you're tracking at your organization. Although a signal on an I-Chart may let you know of a sudden, extreme shift or event, the EWMA will likely reveal if the process has drifted slightly from being centered (assuming it was centered to begin with) and product quality has deteriorated.  Think of where you might apply this tool on a chart you are already using, to learn more from your process!

Bringing Voice of the Customer, a Kano Model and Data Analysis Together to Design Medical Devices in Accelerated Timeframes
From Concept to Deployment to Support (and Everywhere in Between): Understanding the 5 FDA Stages for Medical Device Manufacturing
Finding How to Reduce Costs and Increase Quality in a Forging Process in 1 Project File
Electronics Maker Uses Monte Carlo Simulation to Find Better Specs for Suppliers and Realize Significant Cost Savings