Harvey Balls: Some of the Best-Presenting Visual Comparisons You Might Not Have Even Heard Of

You’ve seen them before. You might have even used them. Harvey balls are symbols to visually communicate qualitative information like project status, product features and employee performance. Unfortunately, making the symbols can be time-consuming in different programs. Thankfully, an easy-to-use and versatile Harvey Balls matrix is now available in Minitab Workspace and Companion by Minitab.

A simple, quick and common use of the Harvey Balls Matrix is to convey project status. In the example below we use the Harvey Balls form to indicate the status of three projects. In under a minute, one can create a form and demonstrate progress and an overview of all projects.

Harvey balls are often used in comparison tables to indicate the degree to which a particular item meets a particular criterion. While comparing products is often pretty straightforward (price, weight, whether they have certain features), Harvey balls are particularly useful for comparing information that is more qualitative, such as taste or preference. In Minitab Workspace or Companion by Minitab, the Harvey Balls template automatically calculates a score, based on your input, to help with your decision-making.

(Companion users, you can get it automatically — ask your data architect to add new templates through the Design Center)

Let’s use an example of someone who is looking to buy and evaluate software. There are a number of things to consider like features, usability and affordability. These characteristics are often measurable, but can sometimes make it difficult to differentiate between products and make a selection. In this basic Harvey Balls Matrix, only using measurable characteristics make it appear that all software choices have pros and cons, but that going with any one of them is the correct decision. 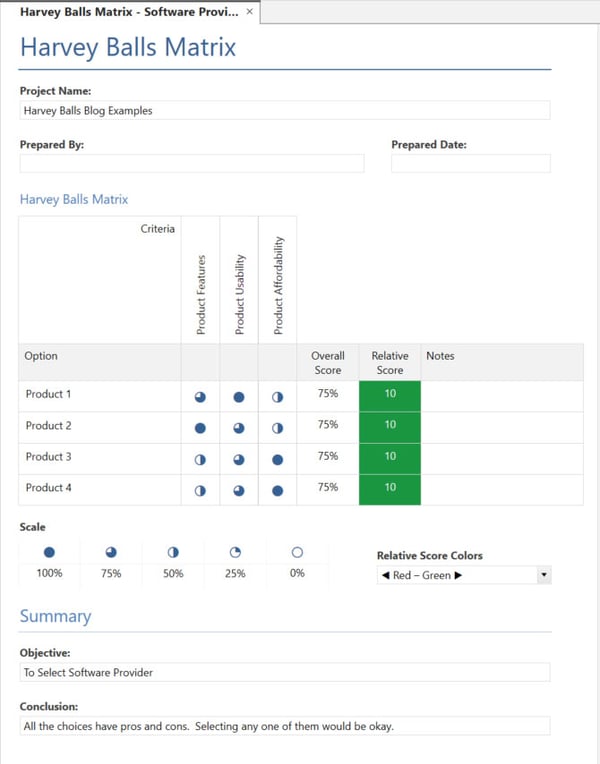 At Minitab, we know investing in software is just as much about partnering up with the software provider as it is the software itself. Incorporating the provider can be difficult, as it often boils down to experience and customer service, which are difficult to quantitatively measure. By using a Harvey Balls Matrix to help select your software – and provider – you can capture all the important characteristics you are looking for and truly make the best decision.

As we added the information about the company providing the software, it becomes obviously clear about the right software to select! 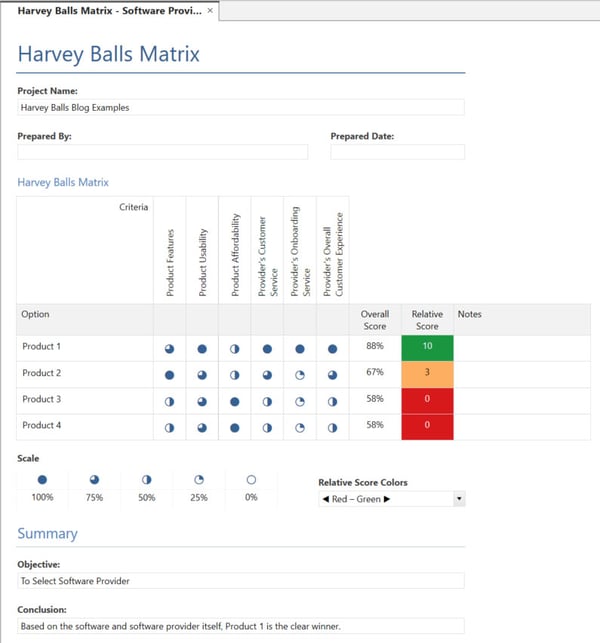 Generally speaking, human resources professionals and managers are challenged with rating and ranking employees. While certain departments like sales might have more quantitative metrics, most departments require a manager’s judgment with respect to the skills of his or her people. Harvey balls are an easy, unbiased way to rate and rank employees.

Most managers aren’t ranking their employees solely on performance. Hopefully most, if not all, are doing their jobs. Oftentimes, there are other characteristics a manager looks for: potential, work ethic, teamwork, etc. In the example below we show you a sample of how Joan, the programming manager on Zoey’s Extraordinary Playlist ranked her employees using a Harvey Balls Matrix. (Spoiler alert! Do not read on if you haven’t watched the show yet!) 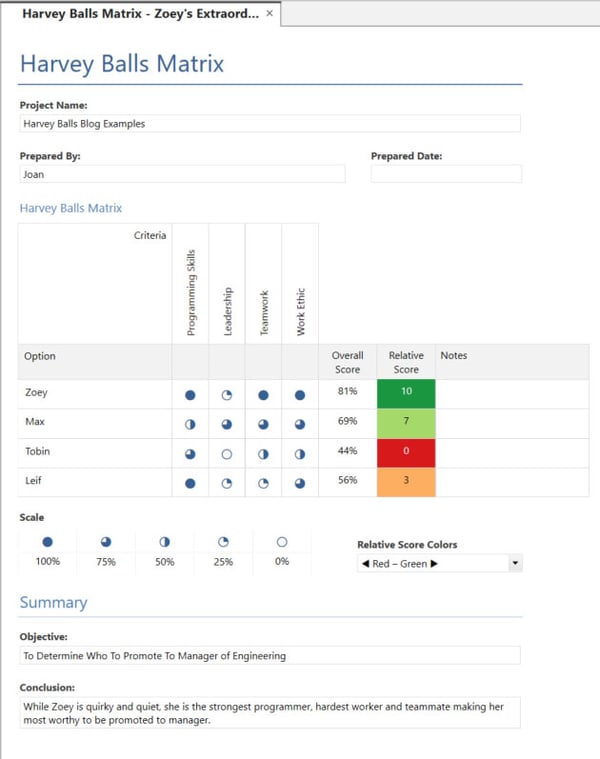 As you can see, Joan assessed her programming team using different characteristics. The Harvey Ball Matrix helped Joan determine who should be promoted by automatically calculating a score based on her assessment. While everyone thought it was quite close between Leif and Zoey because they are both the strongest programmers, the Harvey Ball Matrix makes it clear that the decision to promote Zoey was an easy one.

Interestingly, the Harvey Ball Matrix also unveiled additional insight about the team. Based on the assessment, as it turns out, Max would be the second choice to be manager. This would also help explain how Ava decided to recruit Max to the sixth floor to be promoted for manager. After all, she did admit to hacking Joan’s files!

Other points of interest are that while the team is clearly a strong technical team, it’s really lacking in leadership. Rather than spend training on additional programming, perhaps leadership training is more in order.

Believed to be created by Harvey Poppel at Booz Allen Hamilton in the 1970s, Harvey balls were originally developed to summarize long columns of numeric data for internal project documents. Now, they are commonplace nearly everywhere, across organizations and across the globe.

Whether you've been with us for every word or just skimming through (we understand and appreciate your time!), there's no doubt you could easily understand the percentages the 5 different Harvey ball symbols represent and get a quick and powerful big-picture view when you see them all together in a table. And now, with the easy-to-use and versatile template available for both Minitab Workspace and Companion, there's no need to beg a graphic designer to help you put it all in a slide!

Strategizing My Home Improvements with an Idea Map, Project Prioritization Matrix and Gantt Chart
Can You Be Both Responsible and Informed? Or Accountable and Consulted? All About RACI in Minitab Workspace
Bringing Voice of the Customer, a Kano Model and Data Analysis Together to Design Medical Devices in Accelerated Timeframes
Finding How to Reduce Costs and Increase Quality in a Forging Process in 1 Project File 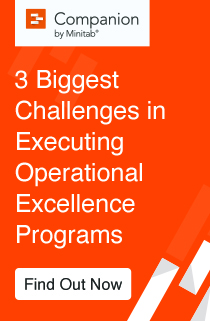 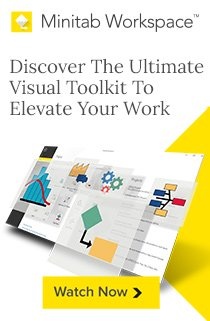