Giving Thanks for the Regression Menu 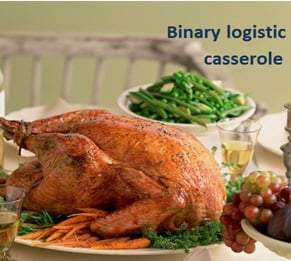 The traditional Thanksgiving menu has so many mouth-watering dishes on the table, you don’t know where to start.

If you savor statistics as much as food, you might feel similarly as you gaze at all of the delicious analyses on Minitab’s Regression menu:

Regression with a Categorical Response

Ever notice the horizontal divider lines on the Minitab menus?  Those are not just to prevent our programmers from writing crooked. Think of them as the separators on a paper plate that keep your cranberry sauce from running into your mashed potatoes, so they don’t mix together and turn pink.

For example, the line at the bottom of the menu neatly separates all the regression analyses that have a categorical response variable.

To use one of these analyses, each response in your data must fall into a separate category. Choose between them based on what kind of categorical response you have. Here’s a concrete scenario:

Binary Logistic Regression: The response falls into one of two categories.

Example: You track whether each person took an antacid after Thanksgiving dinner or not (Yes or No)

Ordinal Logistic Regression: The categories of your response can be ordered from least to greatest.

Example: You record how many belt buckle notches each person expanded their belt after dinner (0-4 notches)

Nominal Logistic Regression: The categories of your response do not follow an order.

Example: You ask each person which of these animals they most feel like after Thanksgiving dinner: A beached whale, a sea elephant, or an anaconda after swallowing a wild pig.

Regression with a Continuous Response

The line at the top of Minitab's Regression menu neatly separates regression analyses that use a continuous response variable.

Regression: You have one or more continuous predictors, and a continuous response.

Example: You track how many minutes each person spends laying belly-up on the living room floor after Thanksgiving dinner.

General Regression: You have a mix of categorical and continuous predictors, and a continuous response.

Example: Besides the continuous predictors for the helpings of each dish, your model for belly-up time also includes a categorical predictor to indicate whether each person ate snacks before the Thanksgiving meal (Yes or No).

Stepwise Regression: Minitab identifies a useful subset of predictors based on the statistical significance of the predictors (using stepwise, forward selection, or backward elimination)

Example: You want Minitab to tell you which dishes have a statistically significant effect on the number of minutes people spend belly-up on the floor after dinner.

Best Subsets Regression: Minitab identifies a useful subset of predictors based on how much variation the model explains (the maximum R-squared criterion).

Example: You want Minitab to tell you which combination of dishes explains most of the variation in the number of minutes people spend belly-up on the floor after dinner. 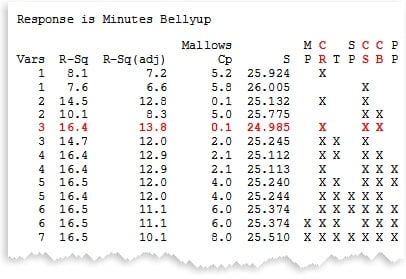 Fitted Line Plot: Display a fitted line and perform regression and for only one continuous predictor and a continuous response.

Example: You want to visualize the association between servings of stuffing and time spent belly-up on the floor. 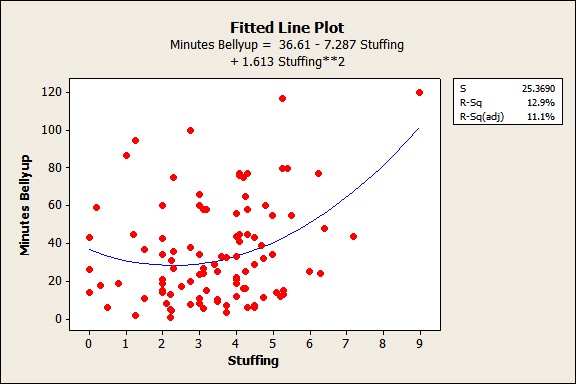 There’s a weak but statistically significant quadratic association between servings of stuffing and time spent belly-up on the floor.

Nonlinear Regression: Specify a nonlinear function to model the relationship between continuous predictors and a continuous response.

Example: Uncle Alfred, a brilliant Ph.D. chemist, has conducted experiments on the chemical properties of chestnuts and their effect on metabolic enzyme reactions that induce fatigue. Based on his research, he knows he can model the relationship between servings of chestnut stuffing and post-prandial prostrate position using a Gompertz growth curve with three parameters. 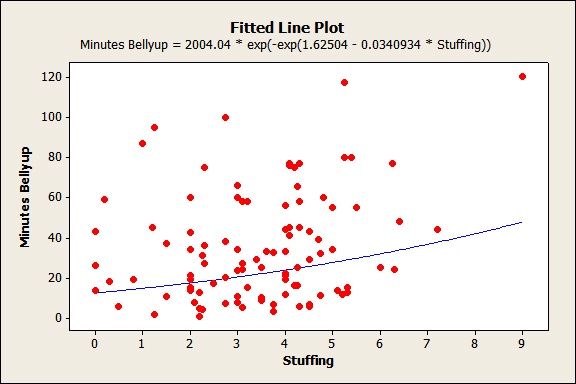 Two analyses on the Regression menu each form their own category. These analyses model a continuous response and continuous predictors, but their applications are specialized.

Example: Grandma got a new digital turkey thermometer for a gift, but she’s suspicious that it doesn’t work as well as her trusty old metal thermometer. Before Thanksgiving, she tests it by using both thermometers to measure the temperature in a pot of water as she chills it in the fridge or heats on the stove, recording the temperature measured on each instrument.

Partial Least Squares Regression: You have few observations relative to the number of predictors, or your predictors are highly associated with each other, making a standard regression analysis problematic.

Example: Suppose your Thanksgiving study sampled only 10 subjects, instead of 100 subjects, but still included all 7 predictor variables. Your small sample caused high standard error for the coefficient estimates. Also, the same people who took many helpings of chestnut stuffing also took many helpings of mashed potatoes and turkey, and had similar responses with more helpings (zzzzzzz....) causing these predictors to be correlated.

Whew! Are you feeling stuffed after sampling all that regression? It may take awhile to digest everything on that menu. If it's too much, I suggest you loosen your belt a notch and lay on the floor for a while.