Traditionally, the pieces and parts for most anything we buy are designed and manufactured one-by-one and then assembled into the final product we see on store shelves.  Everything from cars and jet engines to sneakers and cell phones are produced this way.  With the advent of additive manufacturing or “3D printing,” that familiar formula may soon change.  In this process, a virtual design is fed into a 3D printer that constructs the object, layer by layer, until the finished good is fully produced. Since this is a WYSIWYG process, it is an excellent option for designers and development teams trying to model a concept or part. No need to wait weeks for the machine shop—the 3D printer will have your prototype ready in just a few hours!  The Economist recently highlighted additive manufacturing in a Special Report .

I was interested in the concept of 3D printing, so I searched the Internet to learn more. As it turns out, Statistical Studies of Peer Production recently released a survey of the 3D printing community.  I downloaded the raw survey data they provided and opened the Comma Separated Variable (*.csv) files in Minitab.

First, I wanted to know what types of people were at the cutting edge of this new and exciting technology.  I created an interaction plot of the age, gender, and region, which I then compared with the number of years the respondents had been using 3D printing technology by choosing Stat > ANOVA > Interactions Plot. 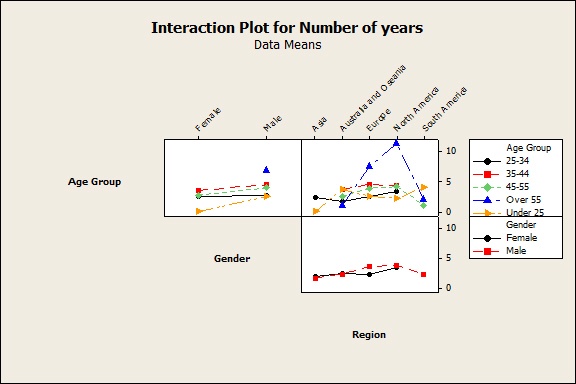 From the Interaction Plot, it seems the folks who have been using 3D printing the most are middle-aged males located in the western hemisphere. As the survey observed and you can see in this graph, people in the Asian region were not early adopters of this technology. This is a little surprising given the rapid advance of their manufacturing sector. Perhaps the high labor cost and aging population in the west is driving the desire for alternative, more efficient manufacturing processes.

In addition to figuring out who was using 3D printing, I wanted to know just what they were using it for. I created a simple Pie Chart of the 3D printing applications listed in Peer Production's survey. As I suspected, the most common use of additive manufacturing processes is for one-off modeling of R&D concepts, artistic items, and perhaps hard-to-find spare and custom parts.

As 3D printing machines become more ubiquitous, there is a good chance we will see the data used in this Pie Chart slowly shift to reflect more common applications and long-run production schedules. Who knows, maybe someday we will each have a 3D printer in our house. No need to order online, let alone run to the store...just print your order instantly! 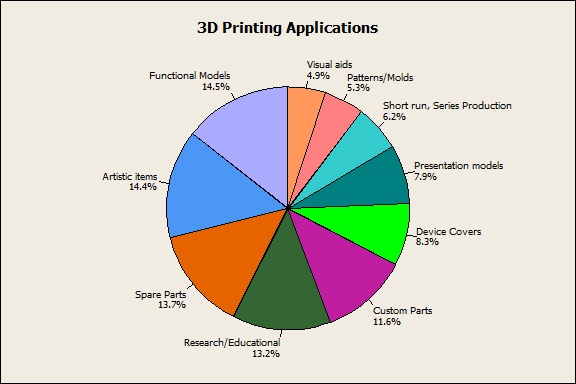 Are you looking forward to the easy availability of 3D printing?

To Insights and Beyond: The 5 Key Challenges & Learnings You Need to Know from 2019 Minitab Insights Conference
5 Quick Minitab Tricks Even Some of the Experts Don't Know
Want to Learn How to Create Good Wine? Let's Pour Over the Details
Don't Stop 'Til You Get Enough: Demystifying CBD Oil Potency with Statistical Methodology