We often see an average (a.k.a. the mean) used to summarize a population or a process. For example, a pizza restaurant might state that their mean delivery time is 20 minutes. Deceptively, this seems like a very intuitive measure.

While the mean is important, people often react to the variability even more. Variability is a measure of how spread out the data are from the mean. How many times have you watched a weather report where the forecaster shows extreme heat and fires in one region and flooding in another? Wouldn’t it be nice to average those together? People feel pain at the extremes more than the average.

This is true of customers as well. Purchasers of a product or service expect a certain experience based on previous purchases. Customers value consistency and predictability in order to feel confident that their money is well spent. In short, customers want low variability and they will notice a deviation from their expectations.

How To Measure Variability and See Its Effects

Let’s compare 2 pizza delivery restaurants, both of which claim to have an average delivery time of 20 minutes. How could you decide which one to order from? Look at their variability.

Let’s assume that both places have an average delivery time of 20 minutes but one has a standard deviation of 5 minutes while the other has a standard deviation of 10 minutes. We'll also assume that the delivery times are normally distributed. Additionally, you consider waiting 30 or more minutes to be unacceptable. How big of a deal is the difference in variability? Use Minitab’s Probability Distribution Plots to find out! 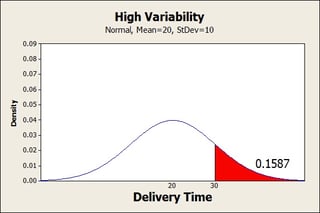 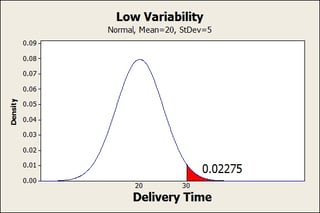 This example illustrates how the mean provides incomplete information, because we have two identical means but two very different results. Higher variability reduces the purchaser’s certainty regarding the product or service that they will receive.

As you can see, assessing the variability in your process analysis is extremely important for quality improvement. Minitab Statistical Software has many tools to help you assess the variability that you have and help you find ways to reduce it.

Hypothesis testing uses your sample data to draw conclusions about one or more populations.

1 Variance
Determine how the variance of one population compares to a target value. For example, you measure the strength of steel in a sample and want to determine whether the variability of the plant’s production is less than a critical threshold.

2 Variances
Determine how 2 population variances compare to each other. For example, you measure the strength of steel in samples from 2 plants and want to determine which plant produces steel that has a more consistent strength.

Test for Equal Variances
Determine whether the variances of 2 or more populations are all equal. This test will tell you if steel from multiple plants are equally consistent or not.

A designed experiment is a series of runs, or tests, in which you purposefully make changes to input variables simultaneously and observe the responses.

Analyze Variability is an analysis in Minitab’s Design of Experiments (DOE) toolkit that identifies factor settings that produce less variable results in 2-level factorial designs with repeat or replicate measurements. For example, say you are studying different manufacturing settings and want to determine how they affect steel quality. Analyze Variability will help you determine how to produce steel with more consistent strength.

In future blogs, I’ll delve into several cases where I ran into variability issues during my research projects.