Using a sample to estimate the properties of an entire population is common practice in statistics. For example, the mean from a random sample estimates that parameter for an entire population. In linear regression analysis, we’re used to the idea that the regression coefficients are estimates of the true parameters. However, it’s easy to forget that R-squared (R2) is also an estimate. Unfortunately, it has a problem that many other estimates don’t have. R-squared is inherently biased!

In this post, I look at how to obtain an unbiased and reasonably precise estimate of the population R-squared. I also present power and sample size guidelines for regression analysis.

R-squared as a Biased Estimate

R-squared measures the strength of the relationship between the predictors and response. The R-squared in your regression output is a biased estimate based on your sample.

R-squared is like the broken bathroom scale: it is deceptively large. Researchers have long recognized that regression’s optimization process takes advantage of chance correlations in the sample data and inflates the R-squared.

This bias is a reason why some practitioners don’t use R-squared at all—it tends to be wrong.

What should we do about this bias? Fortunately, there is a solution and you’re probably already familiar with it: adjusted R-squared. I’ve written about using the adjusted R-squared to compare regression models with a different number of terms. Another use is that it is an unbiased estimator of the population R-squared.

Adjusted R-squared does what you’d do with that broken bathroom scale. If you knew the scale was consistently too high, you’d reduce it by an appropriate amount to produce an accurate weight. In statistics this is called shrinkage. (You Seinfeld fans are probably giggling now. Yes, George, we’re talking about shrinkage, but here it’s a good thing!)

We need to shrink the R-squared down so that it is not biased. Adjusted R-squared does this by comparing the sample size to the number of terms in your regression model.

The graph shows greater shrinkage when you have a smaller sample size per term and lower R-squared values.

Precision of the Adjusted R-squared Estimate

Now that we have an unbiased estimator, let's take a look at the precision.

Rob Kelly, a senior statistician at Minitab, was asked to study this issue in order to develop power and sample size guidelines for regression in the Assistant menu. He simulated the distribution of adjusted R-squared values around different population values of R-squared for different sample sizes. This histogram shows the distribution of 10,000 simulated adjusted R-squared values for a true population value of 0.6 (rho-sq (adj)) for a simple regression model. 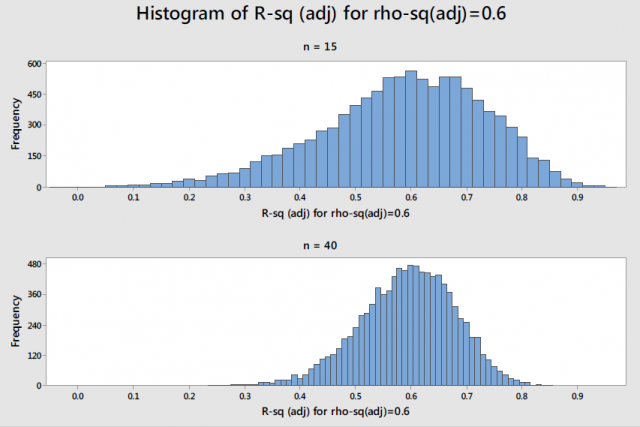 These guidelines help ensure that you have sufficient power to detect a relationship and provide a reasonably precise estimate of the strength of that relationship. Specifically, if you follow these guidelines:

In closing, if you want to estimate the strength of the relationship in the population, assess the adjusted R-squared and consider the precision of the estimate.

Even when you meet the sample size guidelines for regression, the adjusted R-squared is a rough estimate. If the adjusted R2 in your output is 60%, you can be 90% confident that the population value is between 40-80%.