How to Design, Analyze and Interpret the Results of an Expanded Gage R&R Study

The most common type of MSA is the Gage Repeatability and Reproducibility (Gage R&R) study. Most Gage R&R studies assess the effects of two factors on variation in your measurement system—typically Operator and Part. It can help you answer a variety of questions, including:

However, the effects of Operator and Part frequently are not enough to provide a complete understanding of the measurement system. Adding a third variable (typically “Gage”) to the standard study is often required.

When 3 or more factors are included in the analysis, we call the study an Expanded Gage R&R. In the following situations, a third factor is crucial to understanding the system. Here are a couple example scenarios.

What are the 5 Main Differences Between Standard and Expanded Gage R&R Studies?

Experiences with Expanded Gage R&R in the Field

Minitab has helped dozens of companies implement Expanded Gage studies to correctly assess their measurement system and improve quality — from surface roughness at Corning, Inc., to coating thickness at AzkoNobel. We have learned that simply running a separate standard Gage R&R at each of the levels of the extra variable is rarely an efficient design for answering the questions of interest.

To help more quality practitioners reap the benefits of this powerful tool, let’s take a step-by-step look at how to design, analyze and interpret the results of an Expanded Gage R&R Study. We will use a system for measuring film thickness from the microelectronics industry for illustration.

Photoresist coating is used in the microelectronics industry to etch integrated circuits for microprocessors, RAM, etc., onto silicon wafers.[1] We need to assess the measurement system for the thickness of this photoresist coating. The thickness affects how coated silicon wafers perform in microelectronics, so obtaining accurate measurements is critical.

The data collection plan is outlined below (only 1 branch is shown for simplicity): 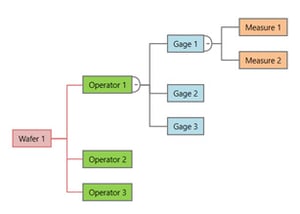 In a standard Gage R&R plan, we would select 10 wafers at random to represent process performance. If a standard study was followed for each of the 3 gages, the total sample size would be:

That is an unacceptably large sample size. By decreasing the number of parts (wafers) from 10 to 5, the entire study can be completed in 90 measurements.

Changing the sampling plan is commonly required to reduce the size of the Expanded Gage R&R study to a manageable level. This is an important difference between a standard and an expanded study. Later, we will demonstrate that reducing the number of parts from 10 to 5 did not compromise the quality of our calculations. 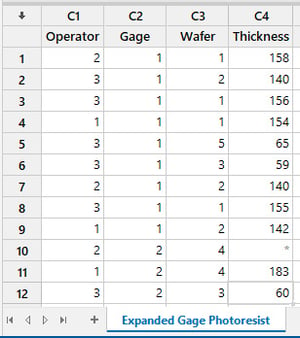 As can be seen in the worksheet for this study’s 90-row dataset, each operator measures each wafer on each of the three gages, twice. Each row has a column that identifies the Operator, Gage, Wafer and Thickness reading. Even though missing data is not allowed in a Standard Gage R&R, an expanded study accommodates missing data, as seen in Row 10 below.

To carry out the analysis in Minitab, choose Stat > Quality Tools > Gage Study > Gage R&R Study (Expanded). Complete the dialog box as shown below. The analysis treats Operator, Part and Gage as random factors because each of these factor levels (e.g. each operator) was randomly sampled from a larger population. (If our measurement system had only two gages and our main goal was to compare them to each other, then our analysis should consider Gage as a fixed factor,[2] and we would identify it as a fixed factor in the dialog box.)

Next, we select the terms we wish to evaluate by clicking Terms… and adding all main effects (Wafer, Operator and Gage) as well as all second-order terms — Wafer*Operator, Wafer*Gage, and Operator*Gage. By including “Gage” in the study, not only do we determine the variability due to the gage main effect, but also its interaction with the other two variables, Operator and Part. Finally, we select the graphs we would like to evaluate by clicking Graphs… and completing the dialog box as shown. 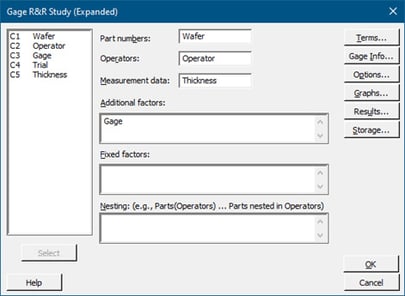 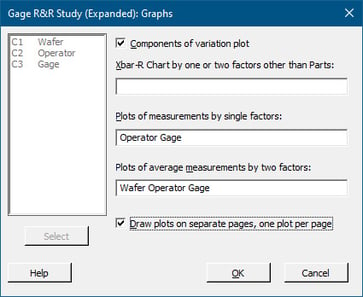 Then click OK to close the dialog boxes, and Minitab will perform the analysis.

Interpreting the Results of the Expanded Gage R&R Study 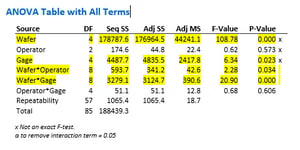 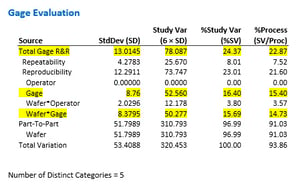 Next we’ll examine the Gage Evaluation table. The Automotive Industry Action Group[4] has set guidelines for %Study Variation and Number of Distinct Categories at a maximum of 30% and a minimum of 5 categories, respectively. Here we see that both measures indicate that this measurement system just narrowly achieves both.

The Gage Evaluation table also shows the relative importance of each of the sources of variation. The variation due to Gage and Wafer*Gage are the two strongest contributors to the overall variation, each accounting for about 15% of Study Variation. We can see the contribution of Gage to the variation in the main effects plot below. The average reading by gage varies from 111 to 123 microns.

However, this is not the full story, because the Wafer*Gage interaction was also a strong contributor to the measurement system variation, as shown in the figure below. 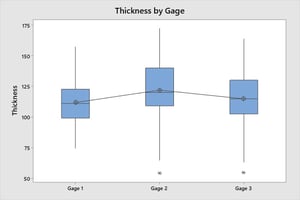 The general agreement seen in the three gages on wafers 3 and 5 indicates there is not a consistent bias between the three gages. However, Gage 1 has a strong positive bias for wafers 1 and 4. Even though the measurement system is acceptable, determining why the gage exhibited bias when measuring wafers 1 and 4 — and fixing this problem — will reduce overall variation in the measurement system. 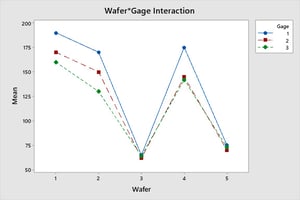 Finally, we return to the question of the effect of reducing the number of parts from 10 to 5. Our capability estimators % Study Variation and Number of Distinct Categories are a function of the part-to-part variability which can be calculated from the parts in the study or from historical data. With only 5 parts, one would expect more reliable results from using the historical standard deviation. The ratio of the measurement system variation to the process variation calculated from historical data is called the % Process shown in the Gage Evaluation table. The general specification on % Process (less than 30%) is the same as that for % Study Variation. When reducing the number of parts below 10, entering a historical standard deviation and focusing on % Process instead of % Study Variation is strongly recommended. In this way, the size of the study can be reduced without concern that the quality of the results have been compromised. In this case, we see that the % Process and % Study Var are nearly equal. Therefore, our conclusions remain the same.