A Simple Guide to Between / Within Capability

Having delivered training courses on capability analyses with Minitab, several times, I have noticed that one question you can be absolutely sure will be asked, during the course, is: What is the difference between the Cpk and the Ppk indices?

The terms Cpk and Ppk are often confused, so that when quality or process engineers refer to the Cpk index, they often actually intend to mean Ppk indices.

Ppk is used to assess the long-term, overall variability, whereas Cpk is the capability index for short-term, potential variability. In this blog post, I will try to make this difference more explicit.

Consider the graph below. Suppose that during a full week period, measurements have been collected day after day. Suppose also that the process we are monitoring is cyclical. The amount of variability within one day is quite small, but because of the cyclical behavior or process instability from day to day, the overall variability during the whole week is much larger than the variability within single days. The Ppk is estimated from the dispersion of all individual values during the whole period, whereas the Cpk is based on variations only within subgroups (within days in my example). 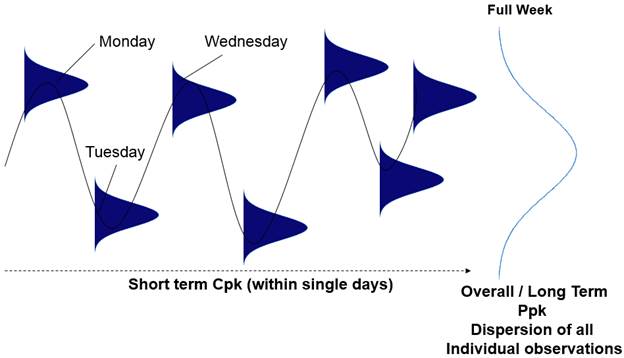 Customers are likely to be affected by the overall variability, and therefore only the Ppk index matters to them. The Cpk often provides an overly optimistic capability estimate because cyclical behaviors between days are not taken into consideration.

As far as the vendor is concerned, it is useful to know that potentially, if the cyclical, unstable behavior was successfully dealt with, the Ppk would be improved and would become equivalent to the Cpk. The graph below illustrates a situation in which the Ppk and the Cpk indices are equivalent because the process is stable. In this case, variations within subgroups are similar to variations during the whole period.

The sources of variability that affect processes in the long term might be different from the ones that take place in the short run. For example, within-batch variability is often much smaller than variations between batches, since parts in the same batch are often processed on the same tools within a short period of time, and have the same processing history. Other sources of variations—such as seasonal changes and modifications in the environment—may have a longer-term impact.

Referring to my previous example, Within variability represents within-batch variability, whereas Between variability represents short-term fluctuations between batches. To estimate these short-term variations between batches, only differences between the averages of consecutive batches are considered (Moving Ranges between averages of consecutive batches). Within and Between variations estimates are then compounded together to calculate a short-term between/within Cpk, whereas the Ppk is still based on the overall long-term variability, considering all individual values (not in time order) during the whole period. 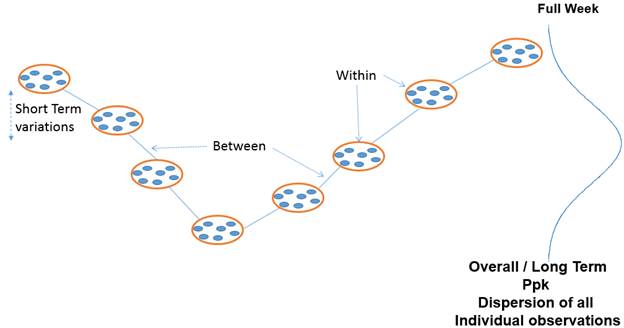 It is important to differentiate short-term variability from long-term variability, because if a process is affected by drifts and systematic long term trends, it will become unstable and therefore unpredictable. A Ppk that is estimated today may not be valid tomorrow because of a long term process shift. Process stability and fluctuations due to random / common causes are necessary to ensure a predictable behavior. The Ppk (overall capability) index should therefore be as close as possible to the Cpk (short term) estimate.

Trimming Decision Trees to Make Paper: Predictive Analytics and Root Cause Analysis in Minitab
How Can You Tell if Your Lean Six Sigma Project is Set Up for Success?
A Food Manufacturer's Secret Process Improvement Recipe for Saving $35 Million
3 Ways Minitab Makes Plotting Histograms More Automatic and Easier than Excel