In honor of the 100th anniversary of the sinking of the Titanic, we recently posted a dataset on the passengers aboard the ship that included Class (coach or first), Gender (female or male), Age, and Status (survived or died).  From Age an additional column was created indicating Child (17 years or younger) or Adult (18 years or older).

In an earlier post, we showed how survival rates could be compared between levels of one variable—for example, females versus males—using Stat > Tables > Cross Tabulation and Chi Square.  But what if we wanted to take all factors into consideration to paint a complete picture of survival rates?

In Minitab Statistical Software, Stat > Regression > Binary Logistic Regression allows us to create models when the response of interest (Status, in this case) is binary and only takes two values. To begin, include all terms and two-way interactions in the model and reduce it from there: 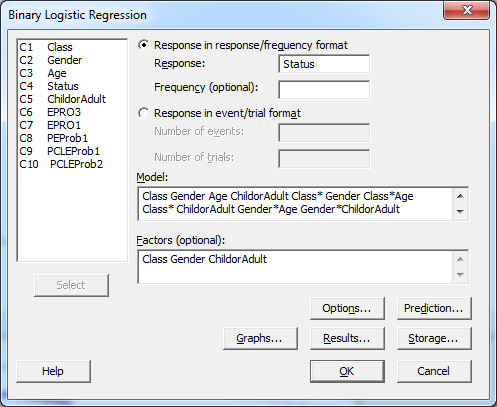 By clicking on Options, choose whether the model will predict the odds of Status = “Died” or Status = “Survived”…as an optimist, I chose “Survived”: 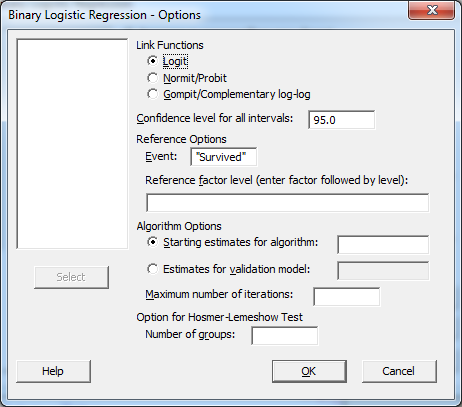 From the p-values, you can determine which factors are significant: Class, Gender, ChildorAdult, and the Gender*Age interaction.  (The Age term is left in the model because it is part of the interaction term.)
Next, we can use the Goodness-of-Fit Tests in the output to determine whether or not the model adequately fits the data:

For these tests, a significant p-value indicates our model does not fit the data adequately.  While we do have one significant test (Deviance), the other two tests provide no evidence of significance and we are fairly comfortable that our model provides a good fit.  If you find you have significant terms but the Goodness-of-Fit Tests are showing an inadequate model fit, it may be worth trying a different Link Function back in the Option dialog.  In this case, I found the Gompit link function to provide the best fit.

Measures of Association to Assess the Regression Model

Finally, we can assess our model using Measures of Association:

Measures of Association compares how often passengers who survived had higher predicted odds of survival than passengers who did not survive.  By comparing every surviving passenger with every passenger who died, Minitab determines how often the model correctly or incorrectly predicted which would survive. In our analysis, 74.2% of the time the surviving passenger had higher predicted odds of survival, while 24.7% of the time they had lower and 1.1% of the time the odds were the same.  With a good model you want a high percentage of concordant pairs and a low percentage of discordant pairs.

Finally, back in the main Binary Logistic Regression dialog box,  choose Prediction and choose to store the predicted odds of survival for each passenger (shown below) or for new data points, as well as confidence intervals: 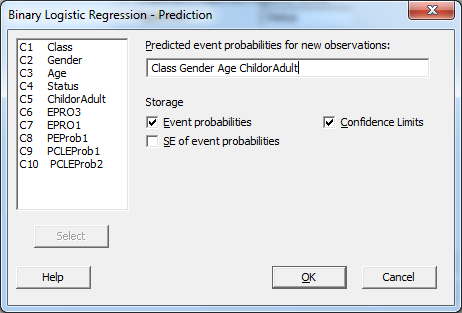 Using this information, I created a graph demonstrating the odds of survival for passengers aboard the Titanic based on all of our significant factors: 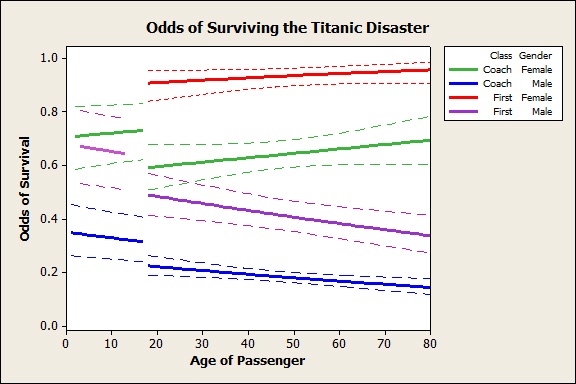 Interestingly, there was only one female child in the first-class cabin on that voyage, therefore we could not model the survival odds for female children in first-class.

Had you been a male passenger who knew ahead of time about the impending tragedy, the cost of a first class ticket would have felt like a bargain. The same 80-year-old male would have enjoyed a relatively good 33.7% chance of survival had he booked in first class.

By looking at multiple factors at once, we are able to get a clear and accurate look at the odds of survival for any passenger based on just a few factors!