How to Compare Regression Slopes

If you perform linear regression analysis, you might need to compare different regression lines to see if their constants and slope coefficients are different. Imagine there is an established relationship between X and Y. Now, suppose you want to determine whether that relationship has changed. Perhaps there is a new context, process, or some other qualitative change, and you want to determine whether that affects the relationship between X and Y.

For example, you might want to assess whether the relationship between the height and weight of football players is significantly different than the same relationship in the general population.

You can graph the regression lines to visually compare the slope coefficients and constants. However, you should also statistically test the differences. Hypothesis testing helps separate the true differences from the random differences caused by sampling error so you can have more confidence in your findings.

In this blog post, I’ll show you how to compare a relationship between different regression models and determine whether the differences are statistically significant. Fortunately, these tests are easy to do using Minitab Statistical Software.

In the example I’ll use throughout this post, there is an input variable and an output variable for a hypothetical process. We want to compare the relationship between these two variables under two different conditions. Here is the Minitab project file with the data.

When the constants (or y intercepts) in two different regression equations are different, this indicates that the two regression lines are shifted up or down on the Y axis. In the scatterplot below, you can see that the Output from Condition B is consistently higher than Condition A for any given Input value. We want to determine whether this vertical shift is statistically significant. 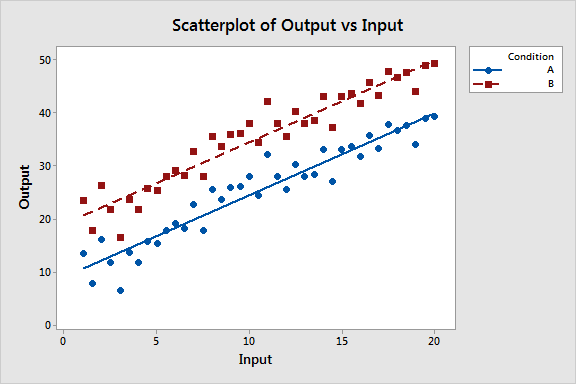 To test the difference between the constants, we just need to include a categorical variable that identifies the qualitative attribute of interest in the model. For our example, I have created a variable for the condition (A or B) associated with each observation.

This table shows us that the relationship between Input and Output is statistically significant because the p-value for Input is 0.000.

When two slope coefficients are different, a one-unit change in a predictor is associated with different mean changes in the response. In the scatterplot below, it appears that a one-unit increase in Input is associated with a greater increase in Output in Condition B than in Condition A. We can see that the slopes look different, but we want to be sure this difference is statistically significant. 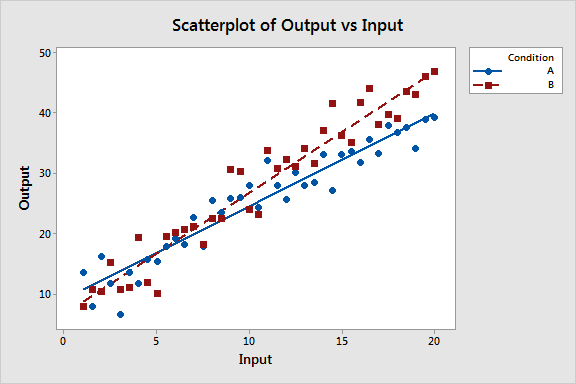 How do you statistically test the difference between regression coefficients? It sounds like it might be complicated, but it is actually very simple. We can even use the same Condition variable that we did for testing the constants.

We need to determine whether the coefficient for Input depends on the Condition. In statistics, when we say that the effect of one variable depends on another variable, that’s an interaction effect. All we need to do is include the interaction term for Input*Condition!

The table shows us that the interaction term (Input*Condition) is statistically significant (p = 0.000). Consequently, we reject the null hypothesis and conclude that the difference between the two coefficients for Input (below, 1.5359 and 2.0050) does not equal zero. We also see that the main effect of Condition is not significant (p = 0.093), which indicates that difference between the two constants is not statistically significant.