How to Identify the Most Important Predictor Variables in Regression Models

You’ve performed multiple linear regression and have settled on a model which contains several predictor variables that are statistically significant. At this point, it’s common to ask, “Which variable is most important?”

This question is more complicated than it first appears. For one thing, how you define “most important” often depends on your subject area and goals. For another, how you collect and measure your sample data can influence the apparent importance of each variable.

With these issues in mind, I’ll help you answer this question. I’ll start by showing you statistics that don’t answer the question about importance, which may surprise you. Then, I’ll move on to both statistical and non-statistical methods for determining which variables are the most important in regression models.

However, the units vary between the different types of variables, which makes it impossible to compare them directly. For example, the meaning of a one-unit change is very different if you’re talking about temperature, weight, or chemical concentration.

This problem is further complicated by the fact that there are different units within each type of measurement. For example, weight can be measured in grams and kilograms. If you fit models for the same data set using grams in one model and kilograms in another, the coefficient for weight changes by a factor of a thousand even though the underlying fit of the model remains unchanged. The coefficient value changes greatly while the importance of the variable remains constant.

The coefficient value doesn’t indicate the importance a variable, but what about the variable’s p-value? After all, we look for low p-values to help determine whether the variable should be included in the model in the first place.

P-value calculations incorporate a variety of properties, but a measure of importance is not among them. A very low p-value can reflect properties other than importance, such as a very precise estimate and a large sample size.

Do Compare These Statistics To Help Determine Variable Importance

Takeaway: Look for the predictor variable with the largest absolute value for the standardized coefficient.

Multiple regression in Minitab's Assistant menu includes a neat analysis. It calculates the increase in R-squared that each variable produces when it is added to a model that already contains all of the other variables.

Because the change in R-squared analysis treats each variable as the last one entered into the model, the change represents the percentage of the variance a variable explains that the other variables in the model cannot explain. In other words, this change in R-squared represents the amount of unique variance that each variable explains above and beyond the other variables in the model.

Takeaway: Look for the predictor variable that is associated with the greatest increase in R-squared. 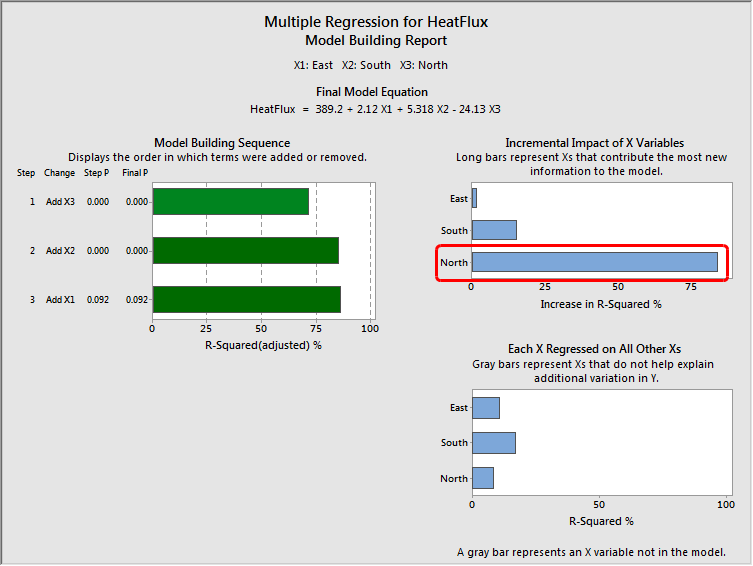 Statistical measures can show the relative importance of the different predictor variables. However, these measures can't determine whether the variables are important in a practical sense. To determine practical importance, you'll need to use your subject area knowledge.

If you randomly sample your observations, the variability of the predictor values in your sample likely reflects the variability in the population. In this case, the standardized coefficients and the change in R-squared values are likely to reflect their population values.

Also, consider the accuracy and precision of the measurements for your predictors because this can affect their apparent importance. For example, lower-quality measurements can cause a variable to appear less predictive than it truly is.

If your goal is to change the response mean, you should be confident that causal relationships exist between the predictors and the response rather just a correlation. If there is an observed correlation but no causation, intentional changes in the predictor values won’t necessarily produce the desired change in the response regardless of the statistical measures of importance.

To determine that there is a causal relationship, you typically need to perform a designed experiment rather than an observational study.

“Most important” is a subjective, context sensitive characteristic. You can use statistics to help identify candidates for the most important variable in a regression model, but you’ll likely need to use your subject area expertise as well.

If you're just learning about regression, read my regression tutorial!