Measurement devices must be calibrated regularly to ensure they perform their jobs properly.  While calibration covers a wide range of applications and scenarios, the goal is simple: ensure your device is measuring to your standards.  Most quality systems require a satisfactory measurement system which includes formal, periodic, and documented calibration of all measuring instruments.  A common problem that engineers face is how to verify that two instruments are measuring parts in a similar fashion.

How do you determine if two instruments provide comparable measurements?

Suppose there is a medical device manufacturer that wants to determine if their blood pressure monitor is equivalent to a similar model on the market.  To verify that the two instruments provide comparable measurements, the manufacturer selects people that represent a range of values where the measurements need to be comparable. Then, they measured the people with both instruments.  The company obtains systolic blood pressure readings on a random sample of 60 people using the two instruments and records the data.  Shown are a sample of the 60 rows, where each row represents a measurement using the Current and New instruments.

The regression equation is: 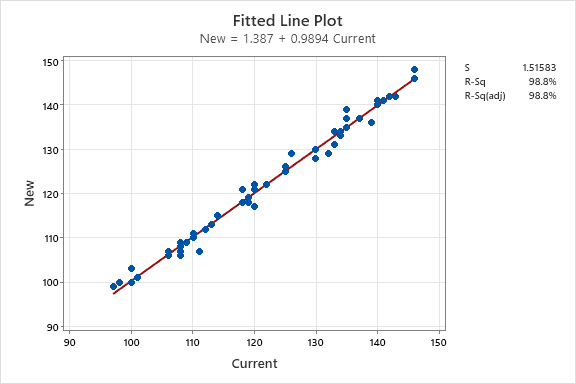 The simple linear regression approach is good when we can assume there are no errors in the horizontal, or X direction.  For this example, this would imply that our current measurement system contains no error.  In the case of measurement systems, we know that assumption is not reasonable- so using simple linear regression is not the best statistical approach.  But no worries, there is another approach that is just as easy to use.

What is orthogonal Regression?

In simple linear regression, the goal is to minimize the sum of the squared vertical distances between the y values and the corresponding values on the fitted line. In orthogonal regression the goal is to minimize the orthogonal (perpendicular) distances from the data points to the fitted line.   While the difference between these approaches may seem minor, when evaluating measurements and parts relative to specifications, it could result in significantly different conclusions.

Orthogonal regression requires that you specify the ratio of the variance of the error in X (Current) and Y (New).  When the measurement method for X and Y is the same, the variances are likely to be equal, which would result in a ratio that equals 1.  But it is good practice to estimate it.  Prior to the data collection for the orthogonal regression, engineers did separate studies on each monitor to estimate measurement variation.  The error variance ratio was calculated by performing an independent Gage Repeatability and Reproducibility study for each measurement device to produce a variance component for Repeatability for each device. The ratio of the two variance components for repeatability estimates can be used as the input for the error variance ratio field.  The variance for the new monitor was 1.08. The variance for the other company's monitor was 1.2. The engineer decides to assign the New monitor to be the response variable and the other company's Current monitor to be the predictor variable. With these assignments, the error variance ratio is 1.08 / 1.2 = 0.9.

The fitted line plot shows that the points fall close to the regression line, which indicates that the model fits the data.  Here we show the Least Squares fit and the Orthogonal fit.  The two fitted equations are seen in the bottom left of the visual. 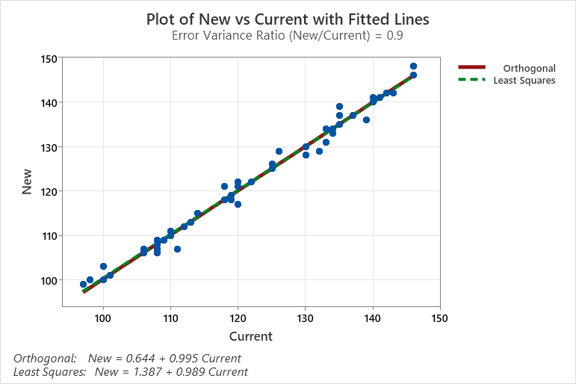 If either of the following conditions is true, the results provide evidence that the blood pressure monitors are not equivalent:

The results show that the confidence interval for the constant, which is from approximately -2.78 to 4.06, contains 0. The confidence interval for the slope, Current, which is from approximately 0.97 to 1.02, contains 1. These results do not provide evidence that the measurements from the monitors differ. Based on these results, the company can conclude their new measurement device performs as well as the current device on the market.

You can find orthogonal regression in most statistical packages, including Minitab Statistical Software.

Get a 30-day free trial of Minitab Statistical Software