Did you know the most popular diamond cut is probably the Round Brilliant Cut? The first early version of what would become the modern Round Brilliant Diamond Cut was introduced by an Italian named Vincent Peruzzi, sometime in the late 17th century.  In the early 1900s, the angles for an "ideal" diamond cut were designed by Marcel Tolkowsky. Minor changes have been made since then, but the angles for "ideal" brilliant cut diamonds have stood the test of time and are still similar to Tolkowsky's formula.

Six Sigma, as you know, evolved from tried and true quality methods developed by the pioneering quality greats from the early 1900s. These methods have been continually improved to be what they are today. Just like a diamond is valuable, has many sides, and withstands the test of time, so has Six Sigma.

I appreciate this quote from Lord Kelvin because it speaks to the very core of Six Sigma Concepts and Metrics:

Like a diamond, Six Sigma has many facets. It can be expressed in a variety of ways, including as a philosophy, a set of tools, a methodology, and a set of metrics.

Six Sigma as a Philosophy

Six Sigma practitioners seek to understand work as a process that can be defined, measured, analyzed, improved and controlled. These processes use inputs (X) to produce outputs (Y). If you can understand how to control the inputs, you will learn how to control the outputs. We use the mathematical equation y = f(x) to express the relationship between inputs and outputs. In the Fitted Line Plot below, as the X variable (Temperature) increases, the Y output (Strength) decreases: 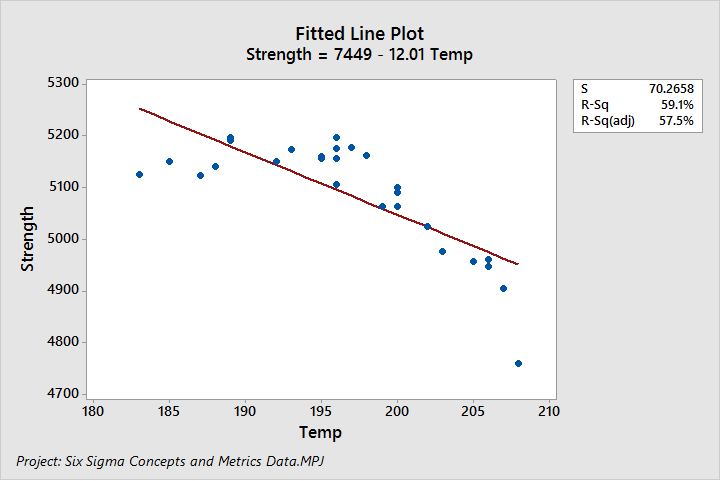 This Fitted Line Plot is a simple example, and in reality the processes we study are usually quite a bit more complicated. We might have 5, 20 or more X's identified.  But as we work through the DMAIC process, we are narrowing down the number of X's to the critical few that have leverage or influence over the process. Then we seek to understand and control the relationship.

Six Sigma as a Methodology

Six Sigma practitioners typically use the DMAIC (Define, Measure, Analyze, Improve, and Control) methodology to identify and analyze a problem, resulting in the implementation of effective and efficient solutions.

I like to compare the Six Sigma DMAIC process to the jigsaw puzzle process. Most people use the same methodology to work a jigsaw puzzle. You open the box, dump out the pieces, turn them face up, find the corners, work the edges, then start working the middle usually by looking at the picture on the front of the box for clues. While not the only way to put together a jigsaw puzzle, it is an efficient and effective process.

When used appropriately, the Six Sigma DMAIC methodology should improve processes and/or products by making them more effective, more efficient, or both.

Six Sigma as a Set of Tools

If you are like me, my tool bag runneth over. I have so many tools, I can’t possibly use them all on one project, nor would I want to. Instead we need to pick and choose which tools to use that will provide information about the problem we are trying to solve. Like when you are working a jigsaw puzzle, sometimes you have to put a piece back because you can’t find where it goes. Then you pick up another piece and keep trying.

Six Sigma as a Metric

Although you want to keep a well-rounded perspective for the metrics on your dashboard, Six Sigma metrics tend to measure process capability and performance. These metrics are all related to each other and focus on measuring the Big Y.

Which metric you choose will depend on the type of data you have. Some of the metrics require discrete data, and others require continuous. It's similar to how a golfer will select a club from their golf bag based on the parameters of the shot, which usually includes the distance needed and field terrain. Most golfers will have some variation of the standard set of clubs in their bag, including drivers, irons, wedges, and putters.

In Part 2 of this series, I will discuss Six Sigma Concepts about variation and the differences between short/long-term variation and between/within-subgroup variation.

1William Thomson, most famously known as Lord Kelvin, was an Irish and British mathematical physicist and engineer who was born in Belfast in 1824. Lord Kelvin is most widely recognized for determining the correct value of absolute zero as approximately −273.15 Celsius.
– Wikipedia