Sunny Day for A Statistician and A Householder – An Update

We had solar panels fitted on our property in 2011. Last year, we had a few problems with the equipment. It was shutting down at various times throughout the day, typically when it was very sunny, resulting in no electricity being generated.

In summer 2016, I completed a statistical analysis in Minitab to confirm my suspicions that my solar panels were not working as well as they did when they were installed. Details of this first analysis can be found here.

After completing this analysis, I spoke to the company who manufactured our inverter and they identified a problem. On the 15th of July 2016, an engineer set up our inverter (the equipment that converts the solar energy from DC to AC), with the correct settings.

I now have the data for the months Jan–June 2017, which I am going to compare to the first six months for the years 2012–2016 to see if this fix has solved the problem.

I am going to use the same analysis as last year, the one-way analysis of variance via the Assistant:  Assistant > Hypothesis Tests > One-Way ANOVA.

The updated descriptive results were as follows:

In my analysis of last year’s data, I found that 2016 was significantly worse than the previous year's.  Using the results from this latest one-way ANOVA, and reviewing the Means Comparison Chart, shown below, I am hoping to see that 2017’s performance is as good as the years 2012–2015, when there were no problems with the solar-generating equipment. 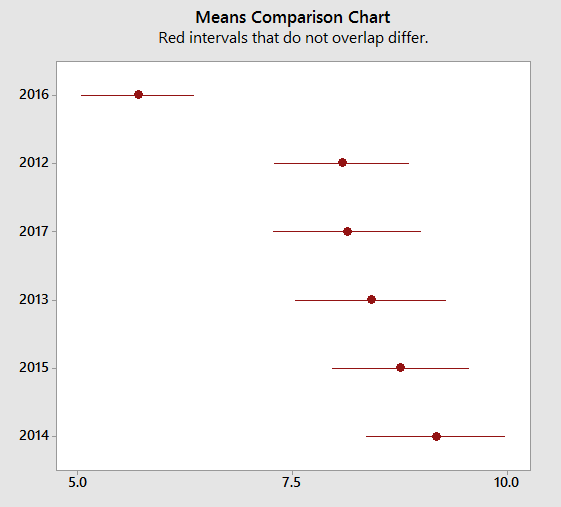 A sunny day for a householder and a statistician!