Welcome to the Hypothesis Test Casino! The featured game of the house is roulette. But this is no ordinary game of roulette. This is p-value roulette!

Here’s how it works: We have two roulette wheels, the Null wheel and the Alternative wheel. Each wheel has 20 slots (instead of the usual 37 or 38). You get to bet on one slot. 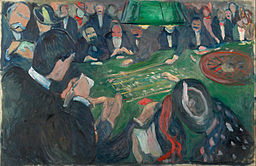 What happens if the ball lands in the slot you bet on? Well, that depends on which wheel we spin. If we spin the Null wheel, you lose your bet. But if we spin the Alternative wheel, you win!

I’m sorry, but we can’t tell you which wheel we’re spinning.

Not convinced yet? I assure you the odds are in your favor if you choose your slot wisely. Look, I’ll show you a graph of some data from the Null wheel. We spun it 10,000 times and counted how many times the ball landed in each slot. As you can see each slot is just as likely as any other, with a probability of about 0.05 each. That means there’s a 95% probability the ball won’t land on your slot, so you have only a 5% chance of losing—no matter what—if we happen to spin the Null wheel. 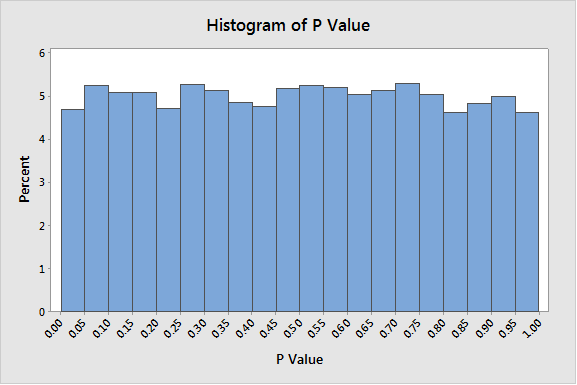 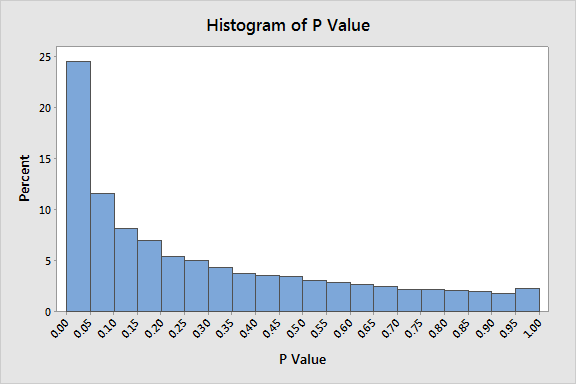 And just a few months ago, we had a different one. Check out the data from this one. It was very, very popular. 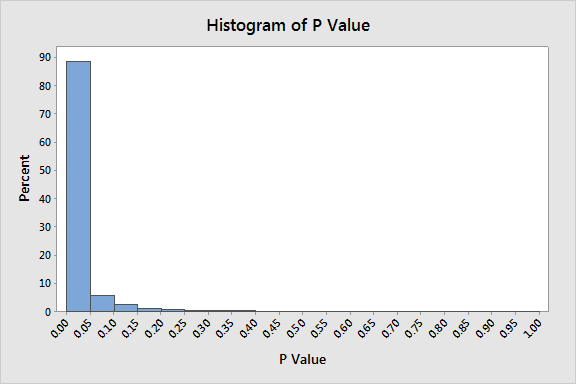 Now that’s what I call an Alternative! People in the know always picked the first slot. You can see why.

I’m not allowed to show you data from the current game. But I assure you the Alternatives all follow this same pattern. They tend to favor those smaller numbers.

Is this on the level?

No, I don’t really have a casino with two roulette wheels. My graphs are simulated p-values for a 1-sample t-test. The null hypothesis is that the mean of a process or population is 5. The two-sided alternative is that the mean is different from 5. In my first graph, the null hypothesis was true: I used Minitab to generate random samples of size 20 from a normal distribution with mean 5 and standard deviation of 1. For the other two graphs, the only thing I changed was the mean of the normal distribution I sampled from.  For the second graph, the mean was 5.3. For the final graph, the mean was 5.75.

For just about any hypothesis test you do in Minitab Statistical Software, you will see a p-value. Once you understand how p-values work, you will have greater insight into what they are telling you. Let’s see what we can learn about p-values from playing p-value roulette.

You Too Can Be a Winner!

To be a winner at p-value roulette, you need to make sure you are performing the right hypothesis test, and that your data fit the assumptions of that test. Minitab’s Assistant menu can help you with that. The Assistant helps you choose the right statistical analysis, provides easy-to-understand guidelines to walk you through data collection and analysis. Then it gives you clear graphical output to let you know how to interpret your p-value, while helping you evaluate whether your data are appropriate, so you can trust your results.