What Are T Values and P Values in Statistics? 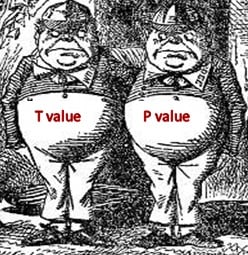 If you’re not a statistician, looking through statistical output can sometimes make you feel a bit like Alice in Wonderland. Suddenly, you step into a fantastical world where strange and mysterious phantasms appear out of nowhere.

For example, consider the T and P in your t-test results.

What are these values, really? Where do they come from? Even if you’ve used the p-value to interpret the statistical significance of your results umpteen times, its actual origin may remain murky to you.

T & P: The Tweedledee and Tweedledum of a T-test

T and P are inextricably linked. They go arm in arm, like Tweedledee and Tweedledum. Here's why.

Remember, the t-value in your output is calculated from only one sample from the entire population. It you took repeated random samples of data from the same population, you'd get slightly different t-values each time, due to random sampling error (which is really not a mistake of any kind–it's just the random variation expected in the data).

How different could you expect the t-values from many random samples from the same population to be? And how does the t-value from your sample data compare to those expected t-values?

You can use a t-distribution to find out.

Using a t-distribution to calculate probability

For the sake of illustration, assume that you're using a 1-sample t-test to determine whether the population mean is greater than a hypothesized value, such as 5, based on a sample of 20 observations, as shown in the above t-test output. 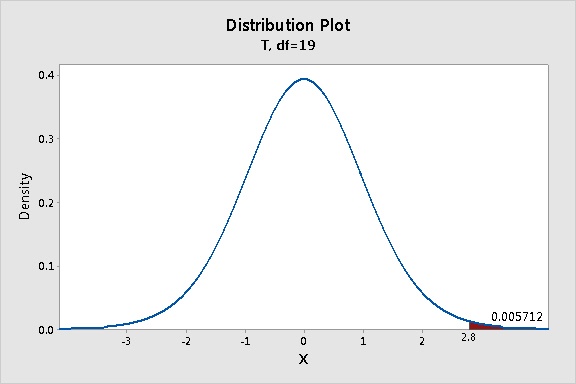 The highest part (peak) of the distribution curve shows you where you can expect most of the t-values to fall. Most of the time, you’d expect to get t-values close to 0. That makes sense, right? Because if you randomly select representative samples from a population, the mean of most of those random samples from the population should be close to the overall population mean, making their differences (and thus the calculated t-values) close to 0.

T values of larger magnitudes (either negative or positive) are less likely. The far left and right "tails" of the distribution curve represent instances of obtaining extreme values of t, far from 0. For example, the shaded region represents the probability of obtaining a t-value of 2.8 or greater. Imagine a magical dart that could be thrown to land randomly anywhere under the distribution curve. What's the chance it would land in the shaded region? The calculated probability is 0.005712.....which rounds to 0.006...which is...the p-value obtained in the t-test results!

In other words, the probability of obtaining a t-value of 2.8 or higher, when sampling from the same population (here, a population with a hypothesized mean of 5), is approximately 0.006.

How likely is that? Not very! For comparison, the probability of being dealt 3-of-a-kind in a 5-card poker hand is over three times as high (≈ 0.021).

To wit: Because the p-value is very low (< alpha level), you reject the null hypothesis and conclude that there's a statistically significant difference.

In this way, T and P are inextricably linked. Consider them simply different ways to quantify the "extremeness" of your results under the null hypothesis. You can’t change the value of one without changing the other.

The larger the absolute value of the t-value, the smaller the p-value, and the greater the evidence against the null hypothesis.(You can verify this by entering lower and higher t values for the t-distribution in step 6 above).

How would you use the t-distribution to find the p-value associated with a t-value of 2.8 for two-tailed t-test (in both directions)?

Hint: In Minitab, adjust the options in step 5 to find the probability for both tails. If you don't have a copy of Minitab, download a free 30-day trial version.