For Want of an FMEA, the Empire Fell 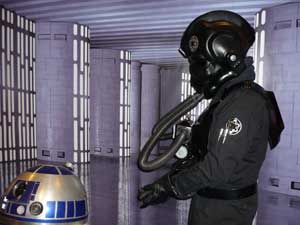 According to the old nursery rhyme, "For Want of a Nail," an entire kingdom was lost because of the lack of one nail for a horseshoe. The same could be said for the Galactic Empire in Star Wars. The Empire would not have fallen if the technicians who created the first Death Star had done a proper Failure Mode and Effects Analysis (FMEA).

A group of rebels in Star Wars, Episode IV: A New Hope stole the plans to the Death Star and found a critical weakness that lead to the destruction of the entire station. A simple thermal exhaust port was connected to a reactor in a way which permitted an explosion in the exhaust port to start a chain reaction that blew up the entire station. This weakness was known, but considered insignificant because the weakness could only be exploited by small space fighters and the exhaust port was protected by turbolasers and TIE fighters. It was thought that nothing could penetrate the defenses; however, a group of Rebel X-Wing fighters proved that this weakness could be exploited. One proton torpedo fired into the thermal exhaust port started a chain reaction that led to the station reactors and destroyed the entire battle station (Lucas, 1976).

Why the Death Star Needed an FMEA

The Death Star was designed by the engineer Bevil Lemelisk under the command of Grand Moff Wilhuff Tarkin; whose doctrine called for a heavily armed mobile battle station carrying more than 1,000,000 imperial personnel as well as over 7,000 TIE fighters and 11,000 land vehicles (Smith, 1991). It was constructed in orbit around the penal planet Despayre in the Horuz system of the Outer Rim Territories and was intended to be a key element of the Tarkin Doctrine for controlling the Empire. The current estimate for the cost of building of a Death Star is $850,000,000,000,000,000 (Rayfield, 2013).

Such an expensive, resource-consuming project should never be attempted without a design FMEA. The loss of the Death Star could have been prevented with just one properly filled-out FMEA during the design phase:

The Galactic Empire's engineers frequently built redundancy into the systems on the Empire’s capital ships and space stations; unfortunately, the Death Star's systems were all connected to the main reactor to ensure that power would always be available for each individual system. This interconnectedness resulted in thermal exhaust ports that were directly connected to the main reactor.

The designers knew that an explosion in a thermal exhaust port could reach the main reactor and destroy the entire station, but they were overconfident and believed that limited prevention measures--such as turbolaser towers, shielding that could not prevent the penetration of small space fighters, and wings of TIE fighters--could protect the thermal exhaust ports (Smith, 1991). Such thinking is little different than discovering a design flaw that could lead to injury or death, but deciding to depend upon inspection to prevent anything bad from happening. Bevil Lemelisk could not have ignored this design flaw if he had created an FMEA.

An FMEA can be done with a pencil and paper, although Minitab's Companion software for executing and reporting on process improvement has a built-in FMEA form that automates calculations, and shares data with process maps and other forms you'll probably need for your project.

An FMEA uses a Risk Priority Number (RPN) to determine when corrective actions must be taken. RPN numbers range from 1 to 1,000 and lower numbers are better. The RPN is determined by multiplying severity (S) by occurrence (O) and detection D.

Severity, occurrence and detection are each evaluated and assigned a number between 1 and 10, with lower numbers being better.

In the case of the Death Star's thermal exhaust ports, the failure mode would be an explosion in the exhaust port and the resulting effect would be a chain reaction that reaches the reactors. The severity would be rated as 10 because an explosion of the reactors would lead to the loss of the station as well as the loss of all the personnel on board. A 10 for severity is sufficient reason to look into a redesign so that a failure, no matter how improbable, does not result in injury or loss of life.

The potential cause of failure on the Death Star would be attack or sabotage; the designers did not consider this likely to happen, so occurrence is a 3. The main control measure was shielding that would only be effective against attack by large ships. This was rated as a 4 because the Empire believed these measures to be effective. 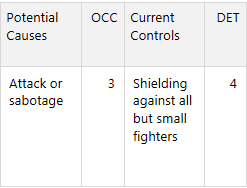 The resulting RPN would be S x O x D =  10 x 3 x 4 = 120. An RPN of 120 should be sufficient reason to take actions, but even a lower RPN requires a corrective action due to the high rating for severity. The Death Star's RPN may even be too low due to the Empire's overconfidence in the current controls. Corrective actions are definitely needed.

Corrective actions are easier and cheaper to implement early in the design phase; particularly if the problem is detected before assembly is started. The original Death Star plans could have been modified with little effort before construction started. The shielding could have been improved to prevent any penetration and more importantly, the interlinks between the systems could have been removed so that a failure of one system, such a an explosion in the thermal exhaust port, does not destroy the entire Death Star. The RPN needs to be reevaluated after corrective actions are implemented and verified; the new Death Star RPN would be 5 x 3 x 2 = 30.

Of course, doing the FMEA would have had more important impacts than just achieving a low number on a piece of paper. Had this step been taken, the Empire could have continued to implement the Tarkin Doctrine, and the Universe would be a much different place today.

Do You Need to Do an FMEA?

A simple truth is demonstrated by the missing nail and the kingdom, as well as the lack of an FMEA and the Death Star:  when designing a new product, whether it is an oil rig, a kitchen appliance, or a Death Star, you'll avoid many future problems by performing an FMEA early in the design phase.

About the Guest Blogger:
Matthew Barsalou is an engineering quality expert in BorgWarner Turbo Systems Engineering GmbH’s Global Engineering Excellence department. He has previously worked as a quality manager at an automotive component supplier and as a contract quality engineer at Ford in Germany and Belgium. He possesses a bachelor of science in industrial sciences, a master of liberal studies and a master of science in business administration and engineering from the Wilhelm Büchner Hochschule in Darmstadt, Germany.