You may have heard that you should use nonparametric tests when your data don’t meet the assumptions of the parametric test, especially the assumption about normally distributed data. That sounds like a nice and straightforward way to choose, but there are additional considerations.

In this post, I’ll help you determine when you should use a:

In particular, I'll focus on an important reason to use nonparametric tests that I don’t think gets mentioned often enough!

Hypothesis Tests of the Mean and Median

Nonparametric tests are like a parallel universe to parametric tests. The table shows related pairs of hypothesis tests that Minitab Statistical Software offers.

Reasons to Use Parametric Tests

This may be a surprise but parametric tests can perform well with continuous data that are nonnormal if you satisfy the sample size guidelines in the table below. These guidelines are based on simulation studies conducted by statisticians here at Minitab. To learn more about these studies, read our Technical Papers.

Reason 2: Parametric tests can perform well when the spread of each group is different

On the other hand, if you use the 2-sample t test or One-Way ANOVA, you can simply go to the Options subdialog and uncheck Assume equal variances. Voilà, you’re good to go even when the groups have different spreads!

Parametric tests usually have more statistical power than nonparametric tests. Thus, you are more likely to detect a significant effect when one truly exists.

Reasons to Use Nonparametric Tests

Reason 1: Your area of study is better represented by the median 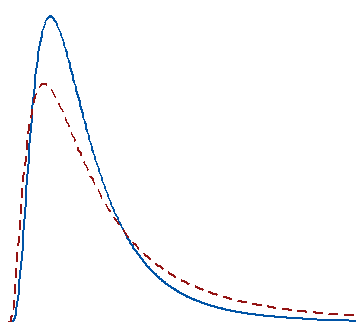 This is my favorite reason to use a nonparametric test and the one that isn’t mentioned often enough! The fact that you can perform a parametric test with nonnormal data doesn’t imply that the mean is the statistic that you want to test.

For example, the center of a skewed distribution, like income, can be better measured by the median where 50% are above the median and 50% are below. If you add a few billionaires to a sample, the mathematical mean increases greatly even though the income for the typical person doesn’t change.

Reason 2: You have a very small sample size

If you don’t meet the sample size guidelines for the parametric tests and you are not confident that you have normally distributed data, you should use a nonparametric test. When you have a really small sample, you might not even be able to ascertain the distribution of your data because the distribution tests will lack sufficient power to provide meaningful results.

In this scenario, you’re in a tough spot with no valid alternative. Nonparametric tests have less power to begin with and it’s a double whammy when you add a small sample size on top of that!

Reason 3: You have ordinal data, ranked data, or outliers that you can’t remove

If you have Likert data and want to compare two groups, read my post Best Way to Analyze Likert Item Data: Two Sample T-Test versus Mann-Whitney.

The decision often depends on whether the mean or median more accurately represents the center of your data’s distribution.