Trying to remember what the alpha-level, p-value, and confidence interval all mean for a hypothesis test—and how they relate to one another—can seem about as daunting as Dorothy’s trek down the yellow brick road.

Rather than sitting through a semester of Intro Stats, let's get right to the point and explain in clear language what all these statistical terms mean and how they relate to one another. 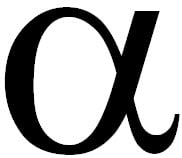 What Does Alpha Mean in a Hypothesis Test?

Translation: It’s the probability of making a wrong decision.

Thanks to famed statistician R. A. Fisher, most folks typically use an alpha level of 0.05. However, if you’re analyzing airplane engine failures, you may want to lower the probability of making a wrong decision and use a smaller alpha. On the other hand, if you're making paper airplanes, you might be willing to increase alpha and accept the higher risk of making the wrong decision.

What Is the P-Value of a Hypothesis Test?

Once you’ve chosen alpha, you’re ready to conduct your hypothesis test. Suppose you want to run a 1-sample t-test to determine whether or not the average price of Cairn terriers—like Dorothy’s dog Toto—is equal to, say, $400. You collect your sample data, put it in Minitab Statistical Software, and then arrive at your p-value.

Statistically speaking, the p-value is the probability of obtaining a result as extreme as, or more extreme than, the result actually obtained when the null hypothesis is true. If that makes your head spin like Dorothy’s house in a Kansas tornado, just pretend Glenda has waved her magic wand and zapped it from your memory. Then ponder this for a moment.

And since the p-value is a probability just like alpha, p-values also range from 0 to 1.

What Is the Confidence Interval for a Hypothesis Test?

Now let's put it all together. These three facts should help you interpret the results of your hypothesis test.

Fact 3: The confidence interval and p-value will always lead you to the same conclusion.

If the p-value is greater than alpha (i.e., it is not significant), then the confidence interval will include the hypothesized mean.

I hope this post has helped to lift the curtain if you've had questions regarding alpha, the p-value, confidence intervals, and how they all relate to one another. If you want more details about these statistical terms and hypothesis testing, I’d recommend giving Quality Trainer a try. Quality Trainer is Minitab’s e-learning course that teaches you both statistical concepts and how to analyze your data using Minitab, and at a cost of only $30 US for one month, it’s well worth the investment.