Equivalence Testing for Quality Analysis (Part II): What Difference Does the Difference Make?

My previous post examined how an equivalence test can shift the burden of proof when you perform hypothesis test of the means. This allows you to more rigorously test whether the process mean is equivalent to a target or to another mean.

Here’s another key difference: To perform the analysis, an equivalence test requires that you first define, upfront, the size of a practically important difference between the mean and the target, or between two means.

Truth be told, even when performing a standard hypothesis test, you should know the value of this difference. Because you can’t really evaluate whether your analysis will have adequate power without knowing it. Nor can you evaluate whether a statistically significant difference in your test results has significant meaning in the real world, outside of probability distribution theory.

But since a standard t-test doesn’t require you to define this difference, people often run the analysis with a fuzzy idea, at best, of what they’re actually looking for. It’s not an error, really. It’s more like using a radon measuring device without knowing what levels of radon are potentially harmful.

How close does the mean have to be to the target value or to another mean for you to consider them, for all practical purposes, “equivalent”?

In some fields, such as the pharmaceutical industry, equivalence limits are set by regulatory guidelines. If there aren’t guidelines for your application, you’ll need to define the zone of equivalence using knowledge of your product or process.

Here’s the bad news: There isn’t a statistician on Earth who can help you define those limits. Because it isn’t a question of statistics. It’s a question of what size of a difference produces tangible ramifications for you or your customer.

Here's a quick example of a 1-sample equivalence test, adapted from Minitab Help.To follow along, you can download the revised data here. If you don't have Minitab, download a free trial version here.

Suppose a packaging company wants to ensure that the force needed to open its snack food bags is within 10% of the target value of 4.2N (Newtons). From previous testing, they know that a force lower than 10% below the target causes the bags to open too easily and reduces product freshness.A force above 10% of the target makes the bags too difficult to open. They randomly sample 100 bags and measure the force required to open each one.

To test whether the mean force is equivalent to the target, they choose Stat > Equivalence Tests > 1-Sample and fill in the dialog box as shown below: 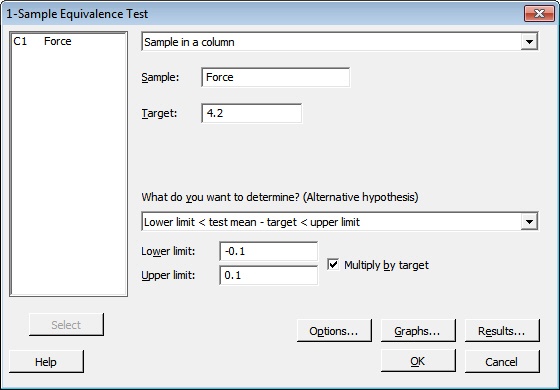 When you click OK, Minitab displays the following results:

The greater of the two P-Values is 0.000. Can claim equivalence. 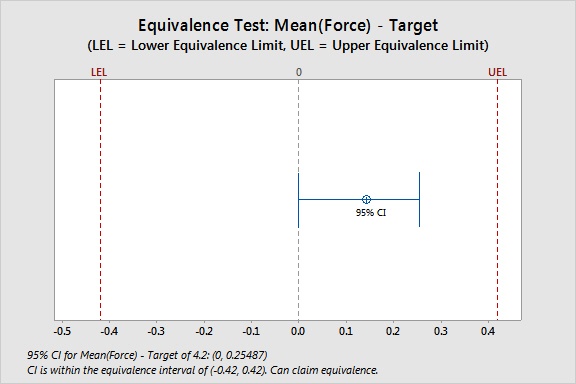 Because the confidence interval for the difference falls completely within the equivalence limits, you can reject the null hypothesis that the mean differs from the target. You can claim that the mean and the target are equivalent.

Notice that if you had used a standard 1-sample t-test to analyze these data, the output would show a statistically significant difference between the mean and the target (at a significance level of  0.05):

These two sets of results aren't really contradictory, though.

The equivalence test has simply defined "equality" between the mean and the target in broader terms, using the values you entered for the equivalence zone. The standard t-test has no knowledge of what "practically significant' means. So it can only evaluate the difference from the target in terms of statistical significance.

There are four types of equivalence tests newly available in Minitab. To learn more about each test, choose Help > Help. Click the Index tab, scroll down to Equivalence testing, and click Overview.