How to Use Brushing to Investigate Outliers on a Graph

There’s a lot going on in the world, so you might not have noticed that the Organization for Economic Development (OECD) released their new set of health statistics for member nations. On the OECD website, you can now download the free data series for 2014. (Be aware that “for 2014” means that the organization has a pretty good idea about what happened in 2012.)

Of course, there’s nothing more fun than sharpening your Minitab skills with real data. Each time the OECD releases their data, we hear about how much money is spent per person on health care compared to how long people live in that nation. (For example, 2013, 2012, and 2011) We also tend to be treated to graphics similar to the scatterplot below, typically with clever variations for the symbols: 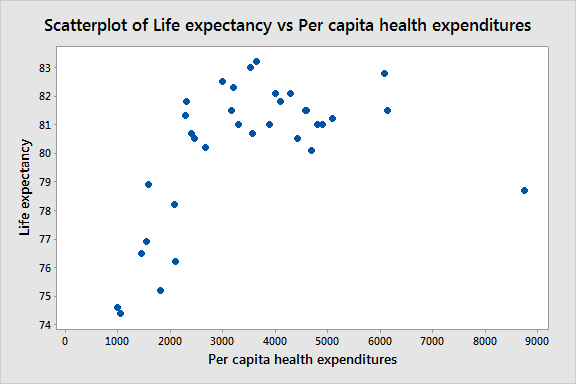 In this display, the point on the far right appears to be an outlier, spending more per capita than other nations but not fitting the general trend of increasing life expectancy as spending increases. When you see an apparent outlier, you want to investigate.

Brushing is a feature in Minitab that makes it easy to investigate outliers in graphs. For example, from the scatterplot in Minitab, you can fit simple regression models with and without the suspected outlier to see how great the influence is on the model. You can copy and paste the data at the end of the post if you want to follow along.

Here’s how to do a visual sensitivity analysis of data on a scatterplot with brushing. Start by making the graph:

Turn on brushing mode and set an ID variable to get specific information about the outlier.  With the scatterplot window active, follow these steps:

In the brushing window, you can see that the unusual point is the United States, row 34 in the data set. You can also see the specific values of life expectancy and per capita health expenditures. 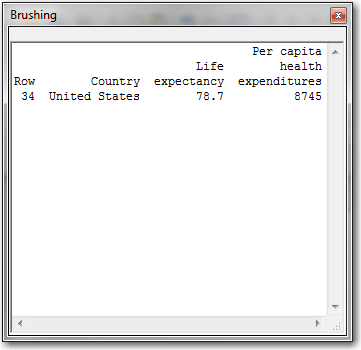 To do the regression with and without the outlier, use brushing to create an indicator variable: 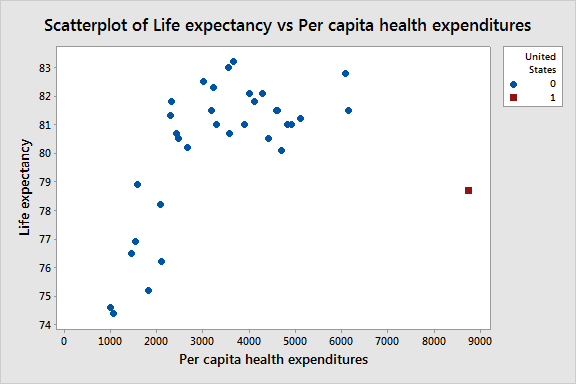 With groups on the graph, you can do separate regression fits for the groups. 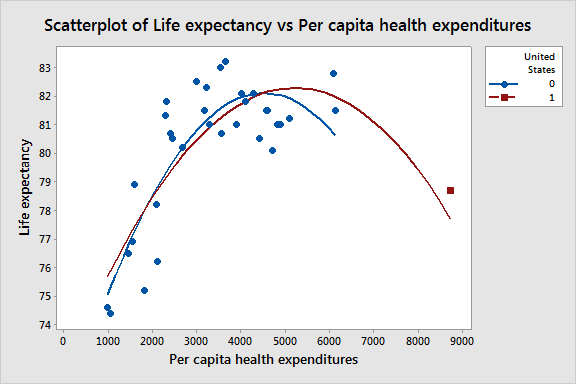 Using Brushing in Other Types of Graphs

Brushing is a great tool in Minitab for investigating specific points on a graph, but it doesn’t just work on scatterplots. If you’re ready for more, you can see the complete list of graphs you can brush and how to make a graph that excludes brushed points. Prefer an example? Check out how Patrick Runkel uses brushing to study the relationships on a bubble plot!

Here’s the data for the per capita health care expenditures in United States dollars and the life expectancy for the total population at birth.