Correlation Is not Causation: Why Running the Football Doesn’t Cause You to Win Games in the NFL 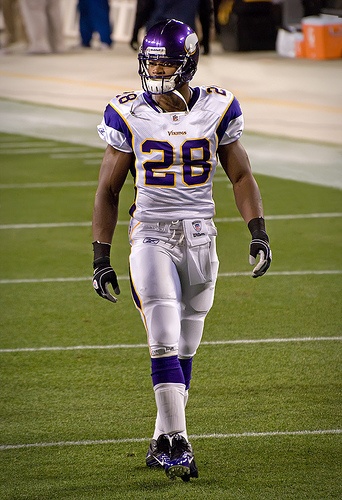 I know we lost by 2 touchdowns, but if only you had given Peterson 3 more carries we would have won!

If only it were that simple.

There is no doubt that teams who run the football win more often. But that doesn’t mean that running the football causes the winning. After all, teams who kneel the ball in the 2nd half win about 99% of the time. So does that mean if teams simply took a knee more frequently in the 2nd half they’d win? Of course not!

Let's dive into the numbers and see if we can figure out what is really going on here.

The Relationship between Rushing and Winning

First, let’s look at how running the football and winning are related. I took data from every game through week 9 of the 2013 NFL season, and recorded if there was a rusher who had over 20 carries and whether that team won or lost. Here are the results (and you can get all the data I used for this statistical analysis here). 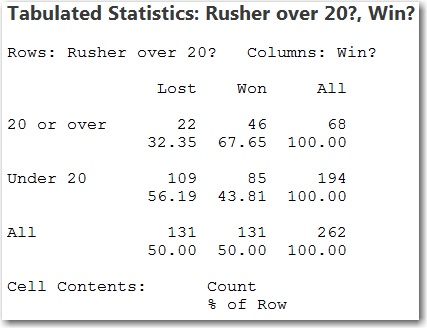 But why did the author of the ESPN article choose 20 or more carries? Why not, say, 25 or more? Surely if running the football matters so much, a team that has a rusher with 25 or more carries must win even more, right? Let's see... 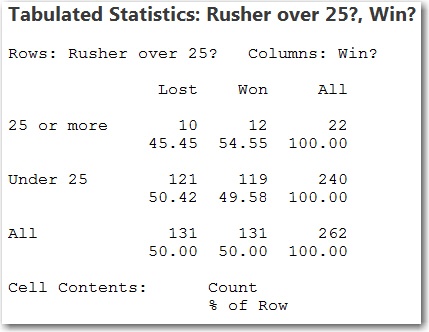 Oh...that’s why he chose 20: because choosing 25 didn’t help his argument. Teams with a rusher who has 25 or more carries have only won 54.55% of their games this year.

So I guess coaches should get their star running back 20-24 carries, then sit him on the bench the rest of the game—68% of the time, it works every time!!

But seriously, one of the problems with picking a “magic number” like 20 or 25 carries is that it decreases our sample size. There have only been 22 instances of a rusher with 25 or more carries this season. And only 68 (26%) have had a rusher get 20 or more carries.

That means we’re ignoring almost three quarters of all the available data!

What we would expect is that as the number of carries by your lead rusher increases, your probability of winning increases, too.

We see that the p-values in the Logistic Regression Table are 0, indicating that there is a significant association between carries by the lead rusher and wins. However, the p-values for the Goodness-of-fit Tests are all very low, too. A low p-value (specifically less than 0.05) indicates that the predicted probabilities deviate from the observed probabilities in a way that the binomial distribution does not predict.

This is not surprising, seeing as the probability of winning went down when we increased the carries from 20 to 25. So the number of carries by the lead rusher doesn’t cause a team to win.

But I’m not done with this “rushing causes winning” myth yet!

The Relationship between Team Rushing and Winning

When I was collecting the data, I noticed multiple cases where a team had a rusher below 20 carries even though they blew the other team out. Take, for instance, Seattle’s week 3 game against Jacksonville, or San Francisco’s week 5 game against Houston.

In both games, Seattle and San Francisco won by at least 4 touchdowns. But their lead rushers only had 17 carries! The reason for this is because they had such large leads, they played their backups before their starting running backs could get to 20 carries. And because the backups played so early, the losing team’s starting running back actually had more carries than the winning teams (more evidence of why the previous model wasn't good).

The p-values in the Logistic Regression Table are 0, indicating a significant association between team rush attempts and wins. And this time our p-values for the goodness-of-fits tests are all greater than 0.05, indicating that that this model is much better than our previous one.

So now that we have a model, we can use that to predict the probability of winning a game based on the entire team's number of rushing attempts. 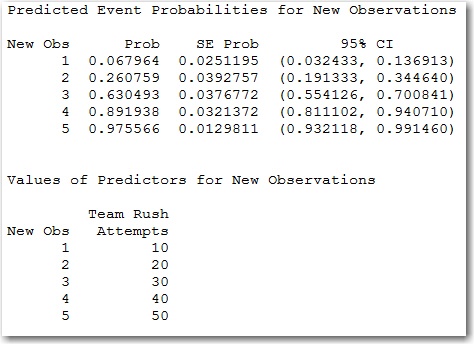 So have we done it? Have we shown that teams that run the ball more win more often? Should I call the Denver Broncos front office and tell them to trade Peyton Manning for Adrian Peterson?

Do Teams Rush to Gain the Lead, or Rush After They Have the Lead?

We’ve established that teams who rush more often win more often. But when are those rushing attempts coming? Just like taking a knee, the extra rushing attempts may just come at the end of the game when the winning team is trying to run the clock.

Take a look at the following table, which presents the average number of rushing attempts for the winning and losing team at different points in the game.

So which is it? Do teams rush to gain the lead, or rush after they have the lead? 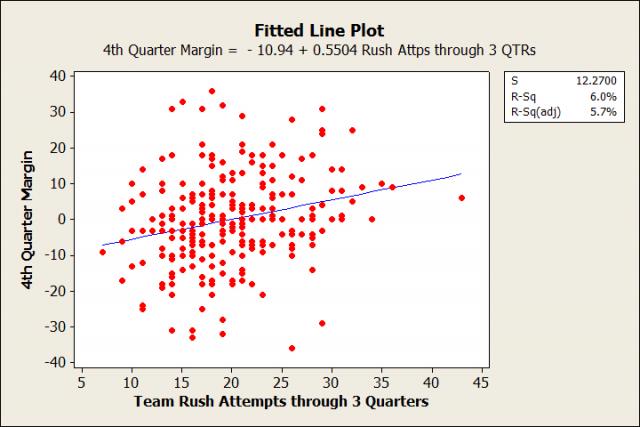 The points appear to be randomly scattered about. The small R2 value of 6% shows almost no relationship between rush attempts through the first 3 quarters and having a lead going into the 4th quarter.

So now we’re going to plot the relationship between the margin going into the 4th quarter, and the number of rushing attempts during the 4th quarter. 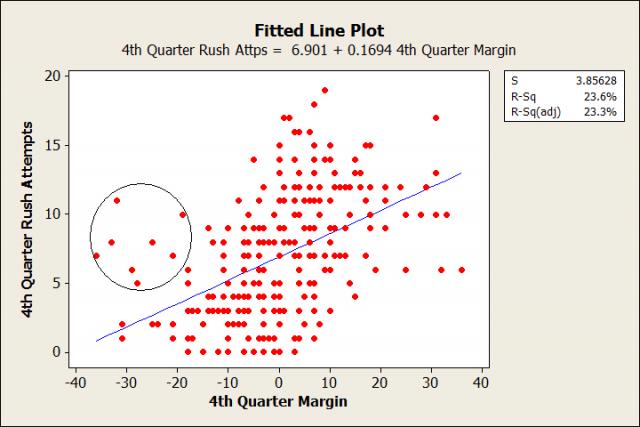 This plot shows that teams with larger leads going into the 4th quarter have more rushing attempts. This plot indicates that it’s the winning that leads to the rushing, not the other way around.

And notice the points I circled on the left hand side of the graph. Those are teams that are behind by so many points that they’re rushing the ball in the 4th quarter just to end the game, rather than trying to throw to catch up (Hello, Jacksonville!). If we don’t include those points (since the team is no longer trying to win), our R2 value increases to 30%. That means that 30% of the variation in the number of rushing attempts a team makes in the 4th quarter can be explained by how many points they’re ahead or behind going into the 4th quarter. Considering all the crazy things that can happen in a quarter of football, I’d say that’s pretty high!

Rushing is definitely an important part of football, but don’t fool yourself into thinking there is some magic number of rushing attempts that guarantees victory. Winning teams have more rushing attempts mostly because they’re trying to run the clock out while the losing team has to throw to catch up. So spread the awareness, lest we have to listen to more fans who think they know more than coaches yelling, “Our team is undefeated when they run the ball at least 30 times. Somebody tell the coaches to run the ball more!!!”

Against the Odds: Honoring Women in Math and Statistics
5 *More* Quick Minitab Tricks Even Some of the Experts Don't Know
Where in the World Is Someone Most Likely to Be a Leap Day Baby?
Let Me Count the Ways: Brainstorming Why I Love Dogs with a Fishbone Diagram