In hospital and clinic settings, making the right decisions doesn’t just reduce costs from duplicative work and process inefficiencies — it results in better outcomes for patients. Think about needing to take an extra X-ray because the first captured the wrong foot. Even if it’s the right limb, what if they captured it from the wrong angle?

Over the 14 years he worked in healthcare quality improvement, Art Wheeler saw this and many other process improvement scenarios. Most recently, as decision support manager for quality improvement services at one of the country’s largest not-for-profit freestanding pediatric healthcare networks, he was the primary statistician, as well as a mentor and coach for Six Sigma Black Belts and Green Belts, program managers and project leaders for 8 1/2 years.

An expert in statistical quality control, one of his key responsibilities was ensuring data was collected in a way that was sound and ensured the best chances for detecting statistical significance of any reported improvements. He also developed the charts and writeups for the analysis sections of corresponding published articles and responded to reviewer questions or comments to help ensure acceptance.

Remember that extra X-ray scenario we mentioned earlier? Art served as a consultant on a duplicate X-ray study, which found each unnecessary scan cost facilities an extra $150 to $300 and overall patients were waiting longer. One study of 18 US pediatric emergency departments showed radiology errors are the third most common event in pediatric emergency research networks and human errors rather than equipment issues caused 87% of them.

Besides reducing errors, the team were also motivated to achieve their goal of zero errors at two clinics so they could also reduce lifetime radiation exposure for individuals, which in turn diminishes their risk of developing cancer. Efforts like this were part of the hospital's “Zero Hero” program – they would measure the time period and the number of cases involved, aim to reduce incidents to zero and record how long they maintained zero incidents.

The Pareto chart below shows the most common error during the 14-month period was incorrect location. 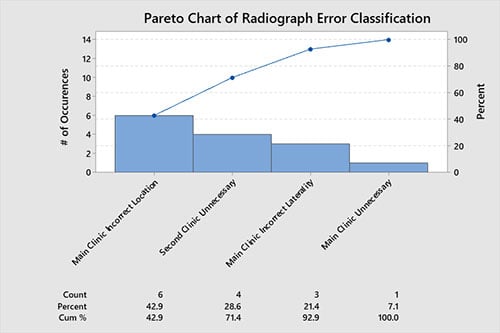 The quality improvement team took steps to meet their zero percent goal in both clinics, which included issuing surveys to patients and families during registration to help document where they needed to be X-rayed and if they had been X-rayed in the past.

The unnecessary radiograph was also a known issue when a clinical athletic trainer preordered multiple radiographs without physician evaluation and assessment. An intervention was made to fix this, making physicians responsible for putting their own radiograph orders in the Electronic Medical Record.