Ask any human resources professional and they’ll tell you that two of their biggest challenges are attracting the right candidates and hiring them quickly. To solve this problem, most companies often provide employee referral programs as an incentive.

Recruiting is the lifeblood for any thriving organization. Employing the right talent can infuse instant contributions, while wrong talent can stall the advancement of objectives for an organization, even set a company back. Not to mention the significant cost that employee turnover can have on an organization. These costs include the cost of hiring, training a new hire, considering any severance or unused PTO, and managing the role until it gets filled.

While many HR professionals try to keep a pulse on hiring, as an organization gets larger, it can be tough to monitor employee performance. Using simple statistical analysis, HR recruiters can employ a scientific approach for recruitment to target the right candidates and onboard them quickly.

This step can be done in different ways. In our example, we’ll use an HR recruiter trying to assess the most effective recruiting grounds for their company. As a prestigious financial services firm in New York, recruiting efforts were focused on the Ivy League universities, local (New York) schools, University of Michigan and Penn State University, the alma maters of the founders of the company.

First, as data is collected, we graph a bar chart of the recruits to see the representation from various schools. We do this by selecting Graph → Bar Chart → Counts of Unique Values. We Click OK on Simple. 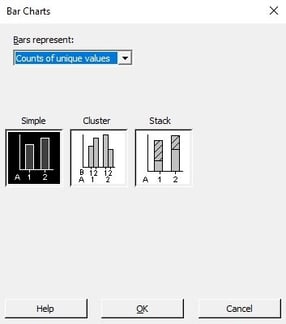 Under Categorical variables, we select Undergraduate. 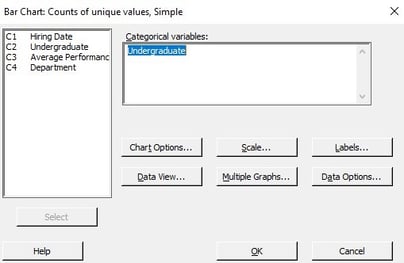 Based on the bar chart, we can see that, despite similar recruiting efforts at all the schools, the company ends up hiring the most people from the University of Pennsylvania. The company also has a lot of success hiring from Columbia, Cornell, NYU and Penn State.

They do not have a lot of success at Harvard and Princeton, so perhaps they can save time and money by eliminating recruiting efforts at those institutions, or try to further investigate better ways to attract those candidates.

Step 2. A Boxplot to See the Quality of the Hires

While the bar chart helps to demonstrate where the company is having success in terms of hiring people, it does not speak to the quality of those hires. What school is delivering the best-performing hires?

The HR department performs a boxplot analysis to look at the performance scores and tenure of the individuals hired from each school. To run this analysis, they go to Graph Boxplot → Select One Y with Two Groups. 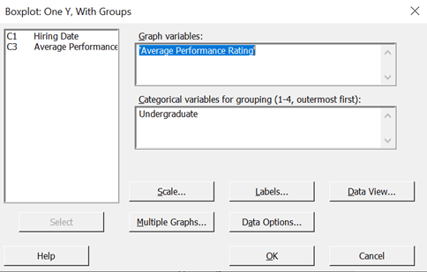 They get the following graph: 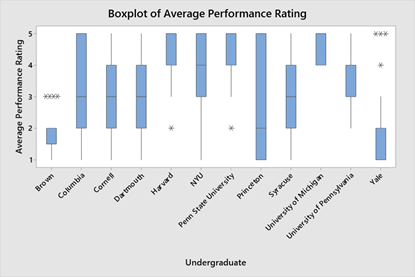 Based on the two boxplots, the HR department gains insight into the performance of the recruits. Interestingly, the best-performing recruits come consistently from Harvard, Penn State and Michigan. That said, both Columbia, NYU, and Princeton all produce solid performers, but there is much more variability of recruits. Clearly, Yale and Brown, on average, have not been delivering good performers.

Without further data analysis, one might simply focus on recruiting at Harvard, Penn State and Michigan. However, it is important to further analyze where the recruits are having success. To do so, we run an interaction plot.

Using this graph, we can determine which schools delivered successful recruits in specific areas. As you can see, the recruits from the University of Michigan performed well across most departments but were particularly strong in marketing. Students from Penn State also performed consistently well but excelled in sales. Princeton, which had significant variability, performed extremely well in HR but not so much in other areas. Harvard students generally performed well, but were best when put in R&D. Columbia, which had a lot of variability, produced very strong engineers. Finally, NYU, which is a fertile recruiting ground for the company, produced generally solid results across all departments.

Step 4. Conclusions That Save Cost and Effort

Armed with this knowledge, a recruiter is now able to cut recruitment activities and better target them. By eliminating certain schools like Brown and Yale, the company can save money and recruitment efforts. They can replace those activities at a school like Harvard, where there are consistently good performers, or simply save money.

As certain needs come up, like additional salespeople, the recruiter could target efforts at Penn State where it had success in the past. Instead of cutting all recruitment efforts at Princeton, which doesn’t produce many hires, it could focus recruitment activities for HR professionals instead.

Ready to get started with Minitab Statistical Software? Start your free trial today!