Checking the “Naughty” or “Nice” Assessment with Attribute Agreement Analysis

Each year Santa’s Elves have to take all the information provided by family, friends and teachers to determine if all the children of the world have been “Naughty” or “Nice.” This is no small task, as according to the website www.santafaqs.com Santa delivers over 5 billion presents per year.

Not only is it a large task in terms of size, but it is critical that the Elves have a consistent approach to this assessment. Santa does not want to give presents to naughty children, but he is adamant that he would rather mistakenly give a present to a naughty child than run the risk of not giving a present to a nice child.

For this reason, every summer Santa trains all his staff on separating people into the “Naughty” and “Nice” categories, and then he gives them a final test on a set of characters where their behaviour category is already known. For each of these 50 characters, Santa gives the Elves details of their behaviour as reported by their family, friends and work colleagues, and they give them a Naughty or Nice grade. To set up and analyse his new Elf recruits performance, Santa uses an Attribute Agreement Analysis.

The full list of characters and their grades can be seen in this Minitab project file: elf-test.mpj. If you don't already have Minitab and you'd like to give Attribute Agreement Analysis a try with this data set, you can download the free 30-day trial. 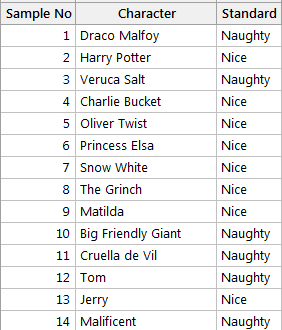 The first thing Santa has to do is create an Attribute Agreement Worksheet, which ensures that each Elf evaluates all the characters in a random order and creates a Minitab worksheet that includes expected category (Naughty or Nice) for each person so that Santa or one of his helpers can quickly enter the Elves assessments.

To avoid any pre-judgement the Elves do not see the name of the person they are assessing—only their Sample No and the information from family and friends.

The steps he follows are:

Santa completes the dialog box as follows and clicks OK. He then prints of the collection datasheets and gets the new Elves to assess the information for each of the people of the list and categorise them as Naughty or Nice.  Once he has this information it is input into the Minitab Worksheet. 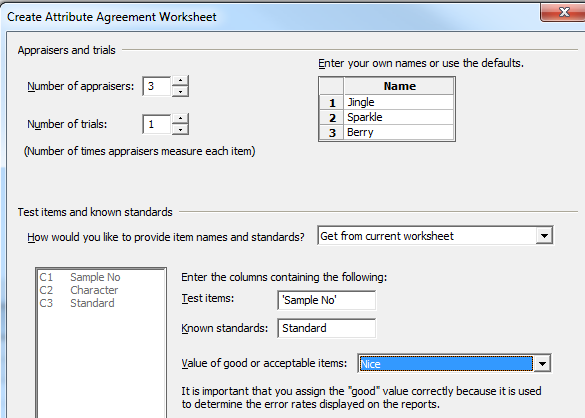 Once Santa has collected all this data, he runs the Attribute Agreement Analysis in the Assistant and gets the following results: 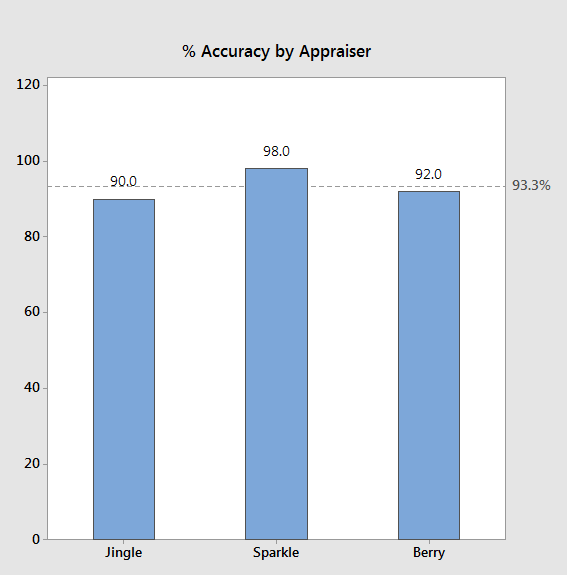 Santa is happy with the overall error rate. However, he is very concerned that the percentage of Nice people being rated as Naughty is higher than the overall error rate. This means that there are some good people that may not get presents. This is not acceptable, so he uses another report produced by Minitab to investigate which people are being mis-classified. 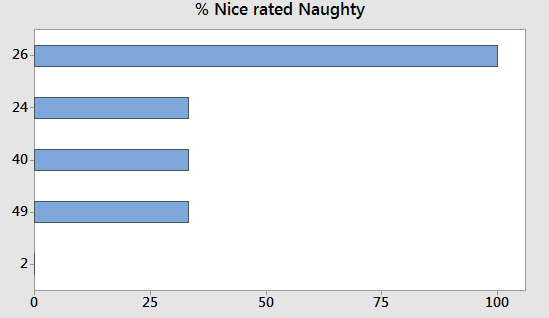 This chart shows which samples were misclassified as Naughty.

Santa is worried because every Elf said person 26 was Naughty when the standard was Nice. When Santa looks at the Elf-Test Worksheet, he can see that person 26 was Sherlock Holmes. Santa checks the information on him and can see why the Elves think he is naughty: he smokes and the neighbours have complained that he plays his violin (badly) at all hours of the day and night. Santa provides extra training to the Elves to help them realise that musicians only improve if they practise regularly, so the neighbours will have to suffer.

Characters, 24, 40 and 49 (Little Red Riding Hood, Stuart Little and Shrek, respectively) were only misclassified once apiece, so Santa wants to investigate which Elves made the wrong decision in these cases and again he uses one of the reports the Assistant produces as a standard. 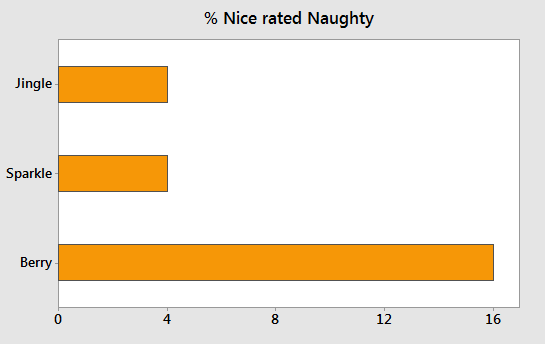 From this report Santa, can see that Berry is the strictest elf—and the one who has made the most mistakes classifying Nice people as Naughty. For this reason, Santa decides to reassign Berry to the reindeer welfare department.

Jingle and Sparkle are now full time Niceness monitors, and Santa is sure—thanks to his training program and the Attribute Agreement Assessment Analysis completed in Minitab—that everyone will get the presents they deserve this year.

If, like Santa, you have to make qualitative assessments on your products or services, an Attribute Agreement Analysis is a good way to verify and improve the performance of you assessors.