In recent posts, we’ve reviewed a number of Measurement Systems Analysis (MSA) studies: Type I Gage Studies, Linearity and Bias Studies, and Gage R&R Studies. Before that, we took a look at a cause and effect diagram, also called a fishbone diagram. And we did all this because we were getting ready to practice a designed experiment. 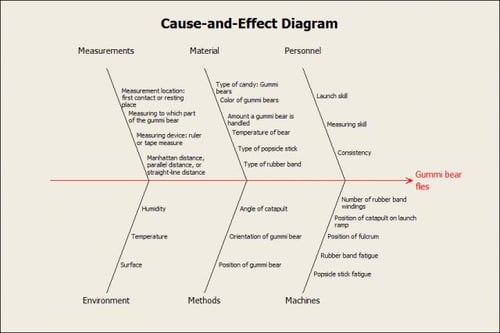 On the fishbone diagram, I came up with 24 variables that might affect how far the gummi bears go. I’d like to study as many of these factors as possible, but first need to decide which ones I can both manipulate and measure. Here are some of my ideas about these:


Of course, just because we can measure and manipulate a variable doesn’t mean that we want to study that variable with design of experiments. For example, even if freezing the bears caused them to be more accurate, do I really want to keep gummi bears in the freezer to do this experiment with when I’m trying to hit a target later? My answer is “no”, although I hope it won’t discourage the brave among you. If you’re not going to be willing to manipulate the variable in practice, because it’s too time-consuming or too expensive, it becomes less important to study what happens when you change it.

Another factor to consider is existing knowledge. The exercise I’m adapting identifies color as a variable that doesn’t have an effect. If we already know a variable doesn’t matter, it doesn’t make sense to study it with design of experiments.

But the more variables we study, the more we know. I’m going to plan to manipulate these variables:


I expect that will give me some fun things to observe, including interactions between the variables. The effect of moving the gummi bear down the popsicle stick might well depend on where the fulcrum is! Next time, we’ll talk a little bit about what to do with the variables that won’t be the focus of the experiment.

Have time for a little more? Check out the breadth of DOE applications that Patrick Runkel describes in DOE—It’s Not Just for Widgets Anymore.